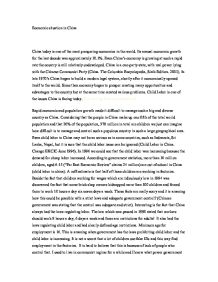 Economic situation in China China today is one of the most prospering economies in the world. Its annual economic growth for the last decade was approximately 10.1%. Even China's economy is growing at such a rapid rate the country is still relatively undeveloped. China is a one-party state, with real power lying with the Chinese Communist Party (China. The Columbia Encyclopedia, Sixth Edition. 2001). In late 1970's China began to build a modern legal system, shortly after it economically opened itself to the world. Since then economy began to prosper creating many opportunities and advantages to the country but at the same time created various problems. Child Labor is one of the issues China is facing today. This writing from coursework.inf Rapid economic and population growth made it difficult to manage such a big and diverse country as China. Considering that the people in China make up one fifth of the total world population and that 26% of the population, 378 million in total are children we just can imagine how difficult is to manage and control such a populous country in such a large geographical area. Even child labor in China may not be as serious as in some countries, such as Indonesia, Sri Lanka, Nepal, but it is sure that the child labor issue can be ignored (Child Labor in China. Change HKCIC-June 1996). In 1996 we could see that the child labor was increasing because the demand for cheap labor increased. According to government statistics, more than 10 million children, aged 6-15 ("Far East Economic Review" claims 24 million) are out of school in China (child labor in china). A ruff estimate is that half of those children are working in factories. Beside the fact that children working for wages which are ridiculously low in 1994 was discovered the fact that some brick shop owners kidnapped more than 100 children and forced them to work 10 hours a day six seven days a week. ...read more.

Those are just a couple examples from the situation of child labor in China. The belief that multinational corporations never seriously monitor their business partners seems valid. Usually when they sub-contract business to their business partners in Hong Kong, Taiwan, South Korea, they just want to avoid any criticism about their direct involvement in the exploitation of Chinese workers and Chinese children (Change HKCIC - June 1996). Even some facts about the state of China's economy were taken from previous years, I think, it quite accurately describe the situation in the country. In current years the situation improved but it is still a long way to go until child labor will be totally eliminated. Education Approximately 82% of adults in China are literate, which means that most of the Chinese population has received some sort of education. 92% of Chinese children finish their primary studies. 69% percent of them go on to secondary school, and only 5.7% make it to college (http://homeport.tcs.tulane.edu). These are the statistics officially stated by Chinese government. The Chinese formal educations system consist of the following parts: early childcare in China ranges from ages 2-6. Kindergartens teach children basic skills like simple mathematics, language, music, physical education, and science. The most important role of these institutions is to instill good moral values. From kindergartens 99% of children move on to primary school. Those schools teach children moral values which are based on equality and cooperation. In primary schools just 92% reach the fifth grade. Those who complete primary school 69% go on to secondary schools that are based on preparation for college entrance examinations. The stressful atmosphere in those schools allows just 5.7% of students to reach the college. Class schedule in schools is very hard and in colleges it reaches even more challenging level. Students as young as ten years old take home an average of eight hours of work per night (http://homeport.tcs.tulane.edu, Children and Society Projects 1999). ...read more.

The previous laws ,which stated that children can work after the compulsory education of nine years, were changed to a minimum allowable age to work which is 16 years. Under that age children are not allowed to be employed or to register any kind of business. Also, there are age restrictions on age in order to work in hazardous areas, which is 18 years of age. The penalties for employment of the children also becoming more and more strict, it ranges from penalties and cancellation of business licenses to imprisonment. We can see that the laws are in place. What concerns me is how these laws are enforced? The current situation tells us that enforcement is not as sufficient as it should be otherwise we would not have so many children working in the country. Government should think about the future of the country and make every attempt to prevent child labor which prevents development of younger generation. The fact that bribery exists and officials get paid to ignore the fact that children are exploited is the factor which has to be eliminated. This is hard to believe that the problem cannot be solved taking into account that government officials are still directly involved in many businesses. To develop as a country China has to make every attempt possible to enforce existing laws and eliminate child labor in their country. The Role of Global Corporation in China Many multinational corporations established operations in China. Many new factories were built there and the scope of operations for many multinational companies is still expanding. Unfortunately the increased operations require more and more labor force which is cheap and efficient. This lead to the fact that the child labor was involved into foreign operations in China. Multinational companies have to face the problem and eliminate it. Well known multinational companies such as "McDonalds", "Nike", "Reebok" were accused of usage of child labor in their products' manufacturing. After initial stage of denial companies admitted that the problem does exist. Most of them have ethical standards for their operations. ...read more.