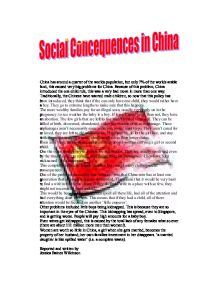 China has around a quarter of the worlds population, but only 7% of the worlds arable land, this caused very big problems for China. Because of this problem, China introduced the one child rule, this was a very bad move in more than one way. Traditionally, the Chinese have wanted male children, so now that this policy has been introduced, they think that if the can only have one child, they would rather have a boy. They go to extreme lengths to make sure that this happens. The more wealthy families pay for an illegal scan, usually very early on in the pregnancy, to see weather the baby is a boy. ...read more.

They aren't cared for or loved, they are left to die of starvation. If the parents do let the girl live, and stay with them, she is given a name which emphasises their lower status. Even until birth, an abortion can be enforced upon a woman carrying a girl or second child. One the other hand, a boy is a cause for celebration. They are usually spoilt and even by the time they get to collage, cant do anything for themselves. They have been nicknamed 'little emperors'. This complete despise of female children has caused many chilling social consequences. ...read more.

This is because they are so important in the eyes of the Chinese. This kidnapping has spread, even to Singapore, and is getting worse. People will pay high amounts for a baby boy. Even wives get kidnapped, this is caused by the total lack of any females what so ever (there are about 111 million more men then women!). Women are worth so little in China, a girl when she gets married, becomes the property of her husband; her own families investment in her disappears. 'a married daughter is like spilled water' (i.e. a complete waste). Reported and written by Jessica Baines Wilkinson ...read more.