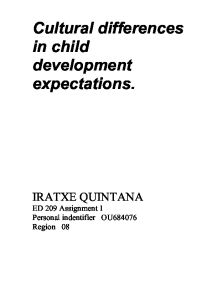 Cultural differences in child development expectations. IRATXE QUINTANA ED 209 Assignment 1 Personal indentifier OU684076 Region 08 ABSTRACT A small research has been carried in order to find out how different cultural backgrounds can influence a child's developmental expectations in adults and the consequences of these expectations. The design of the method was a replication of Hess et al., 1980, study, applied into two mothers with early age daughters, coming from two different cultural backgrounds, English and Spanish. They answered at what age they thought different statements about child development would be reached by their children and being these statements about grouped into 6 main developmental areas the averages were calculated and compared. The results showed an earlier expectation of achievement in all areas of development, except for independence, in the English participant and a complete opposite position of the Spanish participant expecting a late development of the child in general. This might be due to the demand, in the first, of a highly advance society, and the influence in the second of religious and moral values. INTRODUCTION Relationships between culture and knowledge development have a peculiar character. Societies provide to their members with different types of experience that affects and conditionate their knowledge. ...read more.

During the interview both participants thought that their views were typical inside their own cultures. The first participant said that what most influenced her expectations was her own family background and social context and her own education. The second participant said to be influenced by her own instincts and values inculcated by a religious education in Spain. RESULTS Score responses for each statement were as follows: Before four years old ____ score 3 Four or five years old ____ score 2 Six years or older _______ score 1 And averages were calculated for each of the six areas (refer to the summary data sheet).These are the results compared to the American and Japanese mothers from Hess et al. study and the UK mothers from the OU sample. Table A : The developmental goals of four samples of adults. Japanese US OU UK Participant Participant mothers* mothers* mothers* A B Emotional 2.49 2.08 1.84 3 1.50 maturity Compliance 2.24 2.04 2.18 2.75 1.70 Politeness 2.49 2.30 2.61 3 1.50 Independence 2.13 1.92 1.73 1.50 1.37 Social skills 1.87 2.18 2.08 2.83 1.66 Verbal 1.73 2.18 2.17 2 1.40 assertiveness Note: Averages range between 1 and 3, with a higher score indicating a younger age at which children are expected to reach the various developmental goals. ...read more.

Skinner in the theory inside behaviourism, which stresses the role on environment in development. While this participant gives more relevance in development to external stimulus ( behaviourism ) the English participant shows an importance of her baby's own innate capacities interacting with the social world ( social constructivism ). As Whiting and Whiting claimed " in every culture there are customary ideas and expectations about the nature, capacities and proper behaviour of children ( Whiting and Whiting, 1975 ) and this is shown in the example of these two individuals' expectations from different cultural backgrounds. However the difficulty of this study sets in the problem that being just individual people and not samples of them, it is hard to relate the differences to just culture since they are also influenced by different personalities, personal situations, own experiences, ages and family backgrounds which affect at the time to explain behaviour and expectations. For further investigation it would be interesting to observe the expectations of a Spanish individual coming from a non-religious family background. CONCLUSION The influence of an English cultural context shows a concern for early achievement of developmental goals due to a competitive and technologically demanding society while the Spanish culture influence expects a late achievement of development influenced by its priorities of catholic religious beliefs. This might develop into an earlier reach of maturity for English children into the adult world. ...read more.