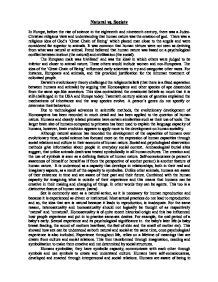 Natural vs. Society In Europe, before the rise of science in the eighteenth and nineteenth century, there was a Judeo-Christian religious view and understanding that human nature was the creation of god. There was a religious idea of God's 'Great Chain of Being' which placed man close to the angels and were considered far superior to animals. It was common that human virtues were not seen as deriving from what was natural or animal. Freud believed that human nature was based on a psychological conflict between instinct (the natural) and civilization (the social). The European male was 'civilized' and was the ideal in which others were judged to be inferior and closer to animal nature. These others would include women and non-Europeans. The idea of the 'Great Chain of Being' influenced early scientists to try and categorize other races. For instance, Europeans and animals, and this provided justification for the inhuman treatment of colonized people. ...read more.

Although natural science has recorded the development of the capacities of humans over evolutionary time, social science has focused more on the expression of human capacities through social relations and culture in their accounts of human nature. Social and psychological observation methods give information about people in everyday social context. Archaeological burial sites suggest, that unlike animals death was treated symbolically in all human cultures. The creation and the use of symbols is seen as a defining feature of human nature. Self-consciousness (a person's awareness of himself or herself as if from the perspective of another person) is another feature of human nature. It is understood as a capacity that develops in relationships, both in their real and imaginary aspects, as a result of the capacity to symbolize. Unlike other animals, humans are aware of their existence in time and are aware of their past and their future. ...read more.

Experience throughout life, relies on a lifetime of meanings that are drawn from culture and social relations. This then transformed through imagination, needing and symbolization to make them creative and not determined by social structures. Humans symbolize; they have symbolic capacity, communicate with each other through symbols and use symbols to create and understand culture. Humans have self-consciousness, developed and enacted through interpersonal and social relations. Humans are aware of being in time. This both enables symbolization and is enabled by it. Humans have imaginative capacity that enables creativity in making things, making culture and relating to people. It explains why people are agents in their lives, more than the sum of external (social and physical) and internal (biological) structures that impinge upon them. The capacities for these human characteristics must derive from nature (more specifically, genes, hormones, bodily structures and the like), but it is in the social environment, mediated by human psychology, that human nature is expressed. ...read more.