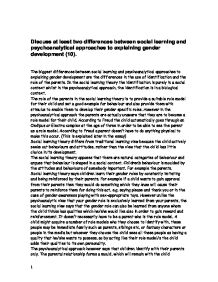 It doesn't necessarily have to be a parent who is the role model. A child might acquire a number of role models who they choose to identify with, these people may be immediate family such as parents, siblings etc, or fantasy characters or people in the media but whoever they choose the child sees all these people as having a quality that he/she wants to possess, so by acting like their role model/s the child adds their qualities to its own personality. The psychoanalytical approach however says that children identify with their parents only. The parental relationship forms a mould, which will remain with the child throughout its life. Freud devised a theory of acquisition of gender identity. His theory was based on the idea surrounding infantile sexuality and the development of self in the first five years of life. Freud said that the first five years of life consisted of three distinctive stages. The oral stage (1st year), the anal stage (2nd to 5th year) and the phallic stage (5th to 6th year). ...read more.

So the boy then assumes a masculine identity, looking to his father as the role model. The Electra complex involves the girl suffering penis envy, and think penis is a symbol of power and believes herself to have been castrated and blames mother for this, hates mother because she thinks mother has made her incomplete, then however her penis envy is substituted by a wish for a baby, so having resolved this conflict goes back to loving mother again and identifies herself as a woman with her mother as her role model. However there has never been any empirical data to prove Freud theory, and his Oedipus complex was devised purely on self-analysis, therefore no accurate case studies were carried out. The Electra complex was also simply just a variation of the Oedipus complex, as Freud couldn't just generalise his theory to one sex so he had to adapt the complex for females. Also it has been found that children learned gender roles perfectly well with only the same sex parent. ?? ?? ?? ?? 1 ...read more.