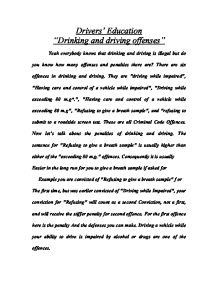 "Refusing to submit to a Roadside Screening Test" is the l st Offence. When you commit this offence you are refusing without reasonable Excuse to give a breath sample for a roadside screening device, or Refusing without reasonable excuse to accompany a police officer For the purposes of giving such a sample, when demanded by an Officer. Before the officer demands a breathalyzer he must Reasonably suspect that you have alcohol in your blood. The maximum penalties for impaired driving causing bodily harm to Someone is up to 10 years in prison and up to 10 year probation From driving. The maximum penalties for impaired driving causing Death is up to 14 years and 10 year probation from driving. The Maximum penalty for manslaughter and criminal negligence causing Death is up to life in prison and up to lifetime probation from Driving. I think that these penalties for all the drinking And driving offences are very appropriate, but I think impaired Driving causing death should be a lifetime imprisonment. Also if a Person is impaired and causes bodily harm to some one they should Have their license suspended from him for 20 years instead of 10 Years. ...read more.