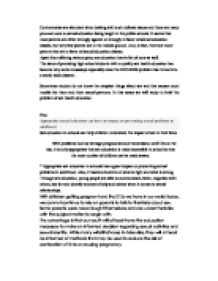 Controversies are abundant when dealing with such delicate issues and there are many pros and cons to sexual education being taught in the public schools. It seems that most parents are either strongly against or strongly in favor of sexual education classes, but very few parents are in the middle ground. And, in fact, there are more parents that are in favor of sexual education classes. Apart from offering various pros, sex education has its list of cons as well. The issue of providing high school students with a quality sex health education has become very acute nowadays especially since the HIV/AIDS problem has turned into a world-wide disaster. Sometimes student do not know the simplest things about sex and that causes much trouble for them and their sexual partners. In this essay we will study in brief the problem of sex health education. Pros Appropriate sexual education can have an impact on preventing sexual problems in adulthood. Sex education in schools can help children understand the impact of sex in their lives. * With problems such as teenage pregnancies and transmission of STDs on the rise, it is only appropriate that sex education is made accessible in school so that the most number of children can be made aware. ...read more.

In the words of some of the sex ed I got, "You won't know if you're bi unless you try it and find out you're bi." This can trap a person in a cycle of behaviors that they wouldn't have engaged in if left alone. It can cause an over familiarity with the body of the opposite sex, and encourage exploration. If taught wrong, it can encourage pornography addictions. If taught wrong, it can discourage abstinence attempts, or justify them by saying "well, no one stays a virgin anymore." For one thing, sex education is an effective way to birth control and lesser teen pregnancies. It is reported that more than 50% of American teenagers lose their virginity by the age of 17 according to the sex education in schools statistics. It is also a fact that more than a million young teen aged girls become pregnant every year in America. Obviously, the percentage of teenage pregnancies in America is many times more than any other westernized country. Therefore, sex education seems to be very important. The disadvantage of not educating our youth about sex is that they will be unsure of the changes that occur in their bodies. Without knowing exactly how or why their body works the way it does, many will experiment without the proper education or knowledge of the risks associated with sexual activity. ...read more.

As a rule, religious groups oppose the teaching of sex education in schools as they believe it encourages children to have sex before they are ready. The viewpoint is if values were taught in school teenagers would wait until they are mature enough to settle down before engaging in sexual activity. Social Views The social views on this issue come from a very similar standpoint to those of religious people. In this case the standpoint is that schools should not get to choose when children are educated about sex, it should be left for parents to decide to tell children about it. Reduction in Pregnancy The teenage pregnancy rate in America has been a constant problem since the late 1980s. The view of many pro-sex education advocates is that teaching children about sex encourages safe sex. This is often followed up with the ever-popular idea of handing out condoms in schools. This idea has some scientific merit, as teen pregnancies have been reduced since sex education became mandatory in schools. Reduction in STIs Along with reducing teen pregnancy there is also a hope educating children about safe sex will reduce the spread of sexual transmitted infections such as chlamydia, syphilis and AIDS. Advocates of sex education see this going hand-in-hand with teachers educating students about the dangers of drinking, smoking and drugs. ?? ?? ?? ?? ...read more.