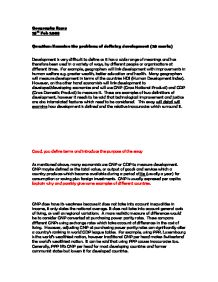 Examine the problems of defining development.

Geography Essay 28th Feb 2003 Question: Examine the problems of defining development (20 marks) Development is very difficult to define as it has a wide range of meanings and has therefore been used in a variety of ways, by different people or organizations at different times. For example, geographers will link development with improvements in human welfare e.g. greater wealth, better education and health. Many geographers will measure development in terms of the countries HDI (Human Development Index). However, on the other hand economists will link development to developed/developing economies and will use GNP (Gross National Product) and GDP (Gross Domestic Product) to measure it. These are examples of two definitions of development, however it needs to be said that technological improvement and justice are also interrelated features which need to be considered. This essay will detail will examine how development is defined and the relative inaccuracies which surround it. Good, you define terms and introduce the purpose of the essay As mentioned above, many economists use GNP or GDP to measure development. ...read more.

Generally, it is said that the lower the level of GDP the poorer the development level of the country. For example, a low level of GDP would indicate poor infrastructure. However, there are large differences between countries which have little correlation with GNP levels. For instance, the USA have fewer paved roads as a percentage of it total than Thailand. This is likely to reflect the low densities of population in much of the USA where it is uneconomic to pave roads. Not clear that this matters- the point is confused. Again use data. Although one of the weaknesses of economic indicators are that they do not include non-monetary factors such as levels of urbanization, manufacturing workforce, life expectancy an economic ( socio-economic?) indicator which does aim to look at non-monetary indicators is human capital. Developing countries have lower levels of human capital (the total value of expertise held by a worker which contribute to their productivity) than developed countries. However, again it is difficult to measure levels of human capital. ...read more.

Nevertheless, although the HDI measures overall progress in a country in achieving human development, based on national-scale data its weakness is it does show differences between rural and urban areas, between different regions or different genders. The fact that is has been developed and used by the United nations is significant. It can be deduced that although social and economic indicators do have their relative merits, they have many weaknesses. Generally, it can be said that economic indicators measures the wealth of the country but gives little indication of the standard of living of the majority of people. The World Bank does classify GNP as an economic indicator of development but stresses that, 'Classification by income does not necessarily reflect development status' Expand on the reasons behind this. You should also name your source Social indicators may seem to be better indicators because they revel the general standard of living in a country; however they do not reflect inequalities in income distribution. They also don't take into account constant review as definitions and concepts of the term development change. ...read more.