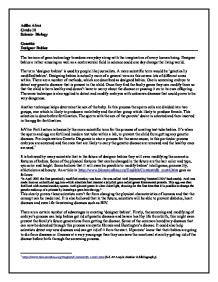 Adiba Afros Grade 10 Science- Biology Genetics Designer Babies The horizon of gene technology broadens everyday along with the imagination of every human being. Designer babies a rather amusing as well as a controversial field in science could one day change the living world. The term 'designer babies' is used by people like journalists. A more scientific term would be 'genetically modified babies'. Designing babies is actually more of a general term as this covers lots of different areas within. There are a number of methods, which are described as designed babies. One is screening embryo to detect any genetic diseases that is present in the child. Once they find the faulty genes they can modify them so that the child is born healthy and doesn't have to worry about the disease or passing it on to its own offspring. The same technique is also applied to detect and modify embryos with unknown diseases that could prove to be very dangerous. Another technique helps determine the sex of the baby. In this process the sperm cells are divided into two groups, one which is likely to produce a male baby and the other group which likely to produce female. This selection is done before fertilization. The sperm with the sex of the parents' desire is selected and then inserted in the egg for fertilization. InVitro Fertilization is basically the more scientific term for the process of creating test-tube babies. It's when the sperm and egg are fertilized inside a test tube within a lab, to prevent the child from getting any genetic diseases. Pre-implantation Genetic Diagnosis is also a process for the same cause; in this particular process embryos are screened and the ones that are ...read more.

It is also possible for the child to be mistreated and segregated from society. Also having a baby of the parents' desired sex could lead to a major global problem, the imbalance of sexes. There could be a larger number of girls than boys or the opposite. Also if the parents spend a lot of money on having a baby of their desired sex and if the results go wrong, what will happen to the baby? It is possible for the child to have a difficult life with the parents or even the society, he or she might not even be accepted if every parent there has babies of their desired sex of a certain sex. The parents might as well mistreat the child or not give him/her equal share of the family. There are already a number of cases of the degrading of certain sex. One example as such is in Southeast Asia in Bangladesh where in the rural areas people prefer to have girl babies rather than boys. And by encouraging this sex selection could cause the problem to spread all over the world. Modifying the phenotype of babies has not yet been discovered, however, it is believed that it will be possible in the future. Even though the concept sounds very exciting, the consequences could create some serious issues in the world. Firstly, this could lead to eugenics. The creation of 'perfect' babies with a higher level of intelligence, beauty, athleticism and free from any diseases, illness or weaknesses could cause the imperfect ones to suffer. There could be a major division in society where one group would be of the highly intelligent 'perfect' beings and the other of not so perfect beings. ...read more.