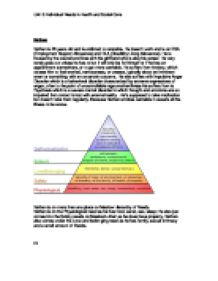 Health plan and individual needs in health and social care for a drug using client.

Nathan Nathan is 26 years old and is addicted to cannabis. He doesn't work and is on ESA (Employment Support Allowance) and DLA (Disability Living Allowance). He is housed by the council and lives with his girlfriend who is also his career. He very rarely goes out unless he has to but it will only be for himself or if he has an appointment somewhere, or to get more cannabis. He suffers from Anxiety, which causes him to feel worried, nervousness, or unease, typically about an imminent event or something with an uncertain outcome. He also suffers with Impulsive Anger Disorder which is a behavioral disorder characterized by extreme expressions of anger, often to the point of uncontrollable rage another illness his suffers from is Psychosis which is a severe mental disorder in which thought and emotions are so impaired that contact is lost with external reality. He's supposed to take medication but doesn't take them regularly. Because Nathan smokes cannabis it cause's all his illness to be worse. ...read more.

This action plan is also giving him the understanding that taking his medication regularly will give him the control over his psychosis and other illnesses and to stop them controlling him. I've also advised that he consults with his doctor on regular bases about the dosage of his medication and how often he should take them. This will also give him a sense of control which is a very key point with his whole situation. Also making a plan of cutting down smoking and looking into ways that can replace the urge of want to smoke. I've also advised him to find a hobby as well to take his mind off smoking cigarettes and his other drug taking. We will be recapping how his hobby and progress is going and if it hasn't helped maybe look at joining a club or a course of some sort. With him doing something with his time we have both agreed that is will be a major help with his anxiety and depression. Once we've established the best course of action we will then eventually try to quit smoking entirely which will give him more energy, money and a much better health. ...read more.