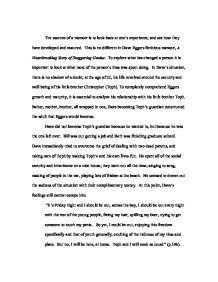 The essence of a memoir is to look back at one's experience, and see how they have developed and matured.

The essence of a memoir is to look back at one's experience, and see how they have developed and matured. This is no different in Dave Eggers fictitious memoir, A Heartbreaking Story of Staggering Genius. To explore what has changed a person it is important to look at what most of the person's time was spent doing. In Dave's situation, there is no shadow of a doubt, at the age of 22, his life revolved around the security and well being of his little brother Christopher (Toph). To completely comprehend Eggers growth and maturity, it is essential to analyze his relationship with his little brother Toph. Father, mother, brother, all wrapped in one, Dave becoming Toph's guardian constructed the adult that Eggers would become. Dave did not become Toph's guardian because he wanted to, but because he was the one left over. Bill was out getting a job and Beth was finishing graduate school. Dave immediately tried to overcome the grief of dealing with two dead parents, and taking care of Toph by making Toph's and his own lives fun. ...read more.

This becomes even more important after he starts "Might" Magazine. He spends whatever $10,000 he has left of the inheritance on the production of the 'twenty something' satirical periodical. This leaves Toph and Dave with little money for housing. Their struggle to find a home really is one of those points where it is questionable weather they will survive. Somewhat remarkably they do. As Toph enters middle school you see a dynamic difference in the two. Toph is now a young teenager who can take care of himself. When Dave gets sick with flu like symptoms, Toph becomes the parents and take responsibility of the two. He cooks dinner, wakes himself up in the morning, makes his own lunch, and then rides his broken bike to school. Dave seeing Toph's method of riding the broken bike to school is an important event in Toph's character description. He has become terribly independent and very modest. He doesn't complain, he doesn't take his stuff for granted, and has become very re source full. It is these qualities in a child which would make a parent very proud. ...read more.

Dave just seemed like a big brother to Toph. The book never describes him disciplining Toph, or Toph throwing a tantrum. This is because of the dire situation they were put into. As a parent Dave did very little lecturing (something everyone's parents love to do) and just let Toph explore life as it came. This is shown when Dave picks up Toph from the girls house. Toph had played his first game of spin the bottle. Dave has all these expectations for Toph and was disappointed to hear that Toph thought nothing special of the girls, but instead of going into his regrets he had, he just let it be, because Toph will figure it out. This seems to be the parenting model in which Dave and Toph's relationship is about. Dave spent less time sheltering and trying to mold Toph to his expectations and more time just having fun with him. This created Toph to become an independent and responsible child. Because Toph was not a conventional parent, some may argue that Dave has little responsibility in Toph's maturing, but don't tell Dave, "parent almighty", so. A Heartbreaking Work of a Staggering Genius "On Good Parenting Values" Sam Ginnis October 9th, 2003 Final Paper ...read more.