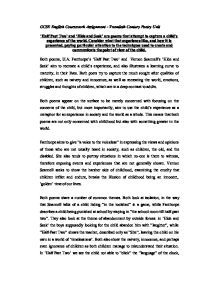 'Half Past Two' and 'Hide and Seek' are poems that attempt to capture a child's experience of the world. Consider what that experience like, and how it is presented,

GCSE English Coursework Assignment - Twentieth Century Poetry Unit 'Half Past Two' and 'Hide and Seek' are poems that attempt to capture a child's experience of the world. Consider what that experience like, and how it is presented, paying particular attention to the techniques used to create and communicate the point of view of the child. Both poems, U.A. Fanthorpe's 'Half Past Two' and Vernon Scannell's 'Hide and Seek' aim to recreate a child's experience, and also illustrates a learning curve to maturity, in their lives. Both poets try to capture the much sought after qualities of children, such as naivety and innocence, as well as recreating the world, emotions, struggles and thoughts of children, which are in a deep contrast to adults. Both poems appear on the surface to be merely concerned with focusing on the concerns of the child, but more importantly, aim to use the child's experience as a metaphor for an experience in society and the world as a whole. This means that both poems are not only concerned with childhood but also with something greater in the world. Fanthorpe aims to give "a voice to the voiceless" in expressing the views and opinions of those who are not usually heard in society, such as children, the old, and the disabled. She also tends to portray situations in which no-one is there to witness, therefore exposing events and experiences that are not generally shown. Vernon Scannell seeks to show the harsher side of childhood, examining the cruelty that children inflict and endure, breaks the illusion of childhood being an innocent, 'golden' time of our lives. ...read more.

This image of confusion is juxtaposed with that of the child trying to work out when "Half Past Two" is by parcelling his day by the events that occur daily, such as "Gettinguptime, timeyouwereofftime, Timetogohomenowtime, TVtime". These compounded words, or enjamberment, manage to create a familiar childhood world, structured by events. The capitalisation of the word "She" referring to the teacher, showing the fear he shows for her, as well as the confusion he has for the petty incident has been involved in which was "Something Very Wrong". Capitalisation not only suggests that the child believes the thing is important to the adult world, but he is also unsure as to what it's meaning is. In 'Hide And Seek' a different type of fear and uncertainty is shown. This is because it is partly mixed with excitement as the child is playing a game. The beginning of the poem opens with short, sharp sentences portraying juvenile excitement, such as "Call out. Call loud" and "They'll never find you in this salty dark, But be careful that your feet aren't sticking out". Suspense is built as first and second person voices are mixed together, the second person being Scannell, the child in retrospect, or the child's subconscious mind. I believe it is more likely that it is the child's subconscious mind, as it would make more sense for the child to be thinking to himself rather than a grown adult, already knowing the outcome, giving the child commands. ...read more.

Fanthorpe suggests that time is the most powerful force in the world, and can only be escaped momentarily. It will not wait for us, as it tick on mercilessly, which is shown when the child is eventually "slotted back" into time again. The poem ends with a paradox as the author suggests that without time the world is magical, free and liberated, yet at the same time isolating as the child is restricted and confined from the rest of the time-driven world. In conclusion, both poems are metaphors for larger and more important issues in life as well as childhood, but both have significantly different tones; 'Half Past Two' begins on a more negative note, as the teacher scolds the child, but ends happily as we see a child undergoing a magical epiphany, while in 'Hide and Seek' we see the poem begin with a playful, innocent note, and end with a more dark note as the child grimly realises that he has been abandoned and humiliated. However, both two share the same view of childhood being a struggle to get through, living in a oppressive adult world. Both poems try to convey to us that society is not as free or as perfect as we believe it to be, reflecting the fact that human nature is constrained and at times malicious. Both poems also try to allow the reader to gain something out of the pieces by making them more aware of the society they live in; 'Half Past Two' encourages people to stop their lives being governed by time, and 'Hide and Seek' advises us to see childhood as a less innocent time of one's life. ...read more.