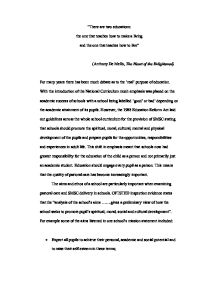 The 'real' purpose of education.

"There are two educations: the one that teaches how to make a living and the one that teaches how to live" (Anthony De Mello, The Heart of the Enlightened) For many years there has been much debate as to the 'real' purpose of education. With the introduction of the National Curriculum much emphasis was placed on the academic success of schools with a school being labelled 'good' or bad' depending on the academic attainment of its pupils. However, the 1988 Education Reform Act laid out guidelines across the whole school curriculum for the provision of SMSC stating that schools should promote the spiritual, moral, cultural, mental and physical development of the pupils and prepare pupils for the opportunities, responsibilities and experiences in adult life. This shift in emphasis meant that schools now had greater responsibility for the education of the child as a person and not primarily just an academic student. Education should engage every pupil as a person. This means that the quality of pastoral care has become increasingly important. The aims and ethos of a school are particularly important when examining pastoral care and SMSC delivery in schools. ...read more.

Before the lesson I arranged with a popular but well-behaved pupil that I would pretend to send her to the head teacher for a serious offence that she had supposedly committed. The class read the selected extract and were then asked the questions I had planned. Their responses were exactly as I had expected so I then launched into the pre-planned routine and sent the girl out of the room - an action which gained little response from the class apart from a few gasps of surprise! I carried on with the lesson for approximately ten minutes and then asked the pupils why that had not attempted to support the girl who had been sent out and to relate their answers to the text. The answers that were received fell neatly into Kohlberg's (1984) theory of moral development and it was easy to assess the pupils' moral development against the stages (see below). Level REASONS TO NOT "STICK-UP" FOR HER REASONS TO "STICK UP" FOR HER Preconventional They might get into trouble as well. She might blame them for something. Conventional She might have done the things that you said. If they don't "stick up" for her everyone will think they are horrible. ...read more.

When undertaking the activities outlined above should the English teacher be responsible for recording achievement in SMSC as well as achievement in English? It would perhaps be useful to incorporate assessment for SMSC into existing assessment arrangements for English and to build up a citizenship portfolio across the curriculum. It is evident, with the introduction of citizenship into the curriculum, that tutorial periods, which were previously the main receptacle for PSHE sessions, will now be used as timetabled slots for citizenship and PSHE will either be pushed into the background or taught through another subject. There is a strong possibility that if it is the latter that it will be taught through English and greater responsibility will be placed on the English teacher. Therefore English teachers must be aware of current issues, include controversial issues which are particularly prominent in the media, and are able to select and teach texts accordingly which deal with these aspects of SMSC. In conclusion the new challenges and initiatives in SMSC offer a great deal of opportunities in both professional and pastoral development through the teaching of English, although it does mean that the English teacher will have more responsibility than previously for this aspect of the curriculum. ...read more.