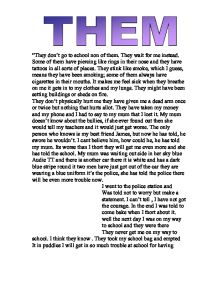 Them - My mum doesn't know about the bullies, if she ever found out then she would tell my teachers and it would just get worse.

"They don't go to school non of them. They wait for me instead. Some of them have piercing like rings in their nose and they have tattoos in all sorts of places. They stink like smoke, which I guess, means they have been smoking; some of them always have cigarettes in their mouths. It makes me feel sick when they breathe on me it gets in to my clothes and my lungs. They might have been setting buildings or sheds on fire. They don't physically hurt me they have given me a dead arm once or twice but nothing that hurts allot. They have taken my money and my phone and I had to say to my mum that I lost it. ...read more.

dark blue stripe round it two men have just got out of the car they are wearing a blue uniform it's the police, she has told the police there will be even more trouble now. I went to the police station and Was told not to worry but make a statement. I can't tell , I have not got the courage. In the end I was told to come bake when I thort about it. well the next day I was on my way to school and they were there They never get me on my way to school. I think they know . They took my school bag and empted It in puddles I will get in so much trouble at school for having dirty books but when you think about it I might not be going back to school. ...read more.

I was to scared to cry so I made noises as they winded me with their powerful kikes. I closed my eyes it felt like I was being kicked for ever, I felt I was getting wet so I painfully opened my bruised eyes to see they were pouring petrol over me then I closed my eyes thinking this is the end as they throw me on to the train track. They then set me alight with a cigarette. I died a painful death. I look back to then and regret not telling any one they could have been stopped. A different child could be being bullied now and I could have saved them from that, but then I guess that child will be to scared to tell any one aswell. Who knows I might meat him or her one-day. ...read more.