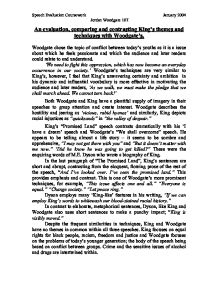 An evaluation, comparing and contrasting King's themes and techniques with Woodgate's.

An evaluation, comparing and contrasting King's themes and techniques with Woodgate's. Woodgate chose the topic of conflict between today's youths as it is a issue about which he feels passionate and which the audience and later readers could relate to and understand. 'We need to fight this oppression, which has now become an everyday occurrence in our society.' Woodgate's techniques are very similar to King's, however, I feel that King's unwavering certainty and ambition in his dynamic and influential vocabulary is more effective in motivating the audience and later readers, 'As we walk, we must make the pledge that we shall march ahead. We cannot turn back!' Both Woodgate and King have a plentiful supply of imagery in their speeches to grasp attention and create interest. ...read more.

"Everyone is equal." "Change society." "Let peace ring." Dyson employs many 'King-like' features in his writing, "If we can employ King's words to whitewash our blood-stained racial history." In contrast to elaborate, metaphorical sentences, Dyson, like King and Woodgate also uses short sentences to make a punchy impact; "King is visibly moved." Despite the frequent similarities in techniques, King and Woodgate have no themes in common within all three speeches. King focuses on equal rights for black people, racism, freedom and justice and Woodgate focuses on the problems of today's younger generation; the body of the speech being based on conflict between groups. Crime and the sensitive issues of alcohol and drugs are intertwined within. Dyson himself employs many of the characteristics of speech-making that King used to emphasise a point, such as repetition; he enthuses about King's strengths almost as a bombardment of magnificent compliments, "the greatest American ever produced", "King's enormous genius", "the defining American of our national history". ...read more.

King's final paragraph is prominent with 'Let freedom ring from...' This technique helps to emphasise a point which the speech-maker feels strongly about, by referring to personal, local place names. Humour is a strong characteristic in Woodgate's speech, used to warm the recipients, encouraging them to share an affinity with him. We can see this when he pointedly refers to Romford as a den of iniquity and uses the term "mummy's boys" to describe one of the youth categories. Alliteration is also a common occurrence in all of the speeches. Woodgate talks about, 'murky mud-flats' 'drunken dope-addicts' 'hyenas of hostility' and King mentions 'symbolic shadow' 'dark and desolate' 'marvellous new militancy.' Woodgate proposes possible solutions and preventions and ways of averting conflict and violence whereas King in his 'I have a dream' speech does not suggest answers. He merely imagines a better future. Speech Evaluation Coursework January 2004 Jordan Woodgate 10T ...read more.