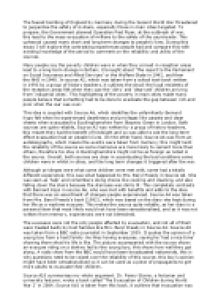 Analysis of sources describing the changes brought about by evacuating children in WW2.

﻿The feared bombing of England by Germany during the Second World War threatened to jeopardise the safety of civilians, especially those in main cities targeted. To prepare, the Government planned Operation Pied Piper, at the outbreak of war, this lead to the mass evacuation of millions to the safety of the countryside. This upheaval caused many short and long term changes to people?s lives. During this essay I will explore the contrasting experiences people had and compare this with existing knowledge of the period to comment on the reliability and utility of the sources. Many people say the poverty children were in when they arrived in reception areas lead to a long-term change in Britain; it brought about ?The report to the Parliament on Social Insurance and Allied Services? or the Welfare State in 1942, and then the NHS in 1948. In source A2, which was taken from a school text-book written in 1993 by a group of history teachers, it outlines the shock the local residents of the reception areas felt when they saw the ?dirty? and ?deprived? children arriving from ?industrial cities?. ...read more.

Overall, both sources are clear in accentuating the bad conditions some children were in whilst in cities, and the long term changes it triggered after the war. Although privileges were what some children were met with, some had a totally different experience; this was what happened to Mrs. Beryl Preedy in Source A4. She was seen as ?help? and remembers doing chores like cooking and cleaning, and also falling down the stairs because the staircase was dimly lit. This completely contrasts with Bernard Kops in source A6, who was met with benefits and adds to the idea that there was an assortment of changes people experienced. Source A4 was taken from Mrs. Beryl Preedy?s book (1992), which was based on the diary she kept during her life as a wartime evacuee. This makes the source quite reliable, as her diary is a personal item that most likely would not have been sensationalised, and as it was not written from memory, experiences were not blemished. ...read more.

It also recapitulates the ?deep and long-lasting? effects it had on education, health and welfare. As this source was written by a historian who had the benefit of hindsight, I believe it is quite reliable. To terminate, I believe that these sources are useful and reliable in telling us how some people lives were changed by evacuation. The sources are clear in outlining the different conditions evacuees were in, and the changes in Britain this brought about, but are lacking diversity in the type of person affected. Most of the people in the sources are children, and come from the point of view of an evacuee or a host family, they fail to mention the other types of people evacuated or the families left behind in the main cities. Although there was a range of different experiences, all the sources are quite personal, which means we don?t get a sense of the bigger picture and how people on a whole were affected by Evacuation. 868 Words ...read more.