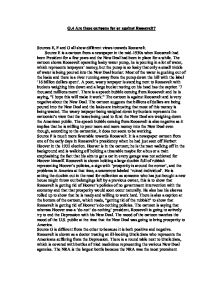 Are these cartoons for or against Roosevelt? Sources E, F and G all show different views towards Roosevelt.

Q.4 Are these cartoons for or against Roosevelt? Sources E, F and G all show different views towards Roosevelt. Source E is a cartoon from a newspaper in the mid-1930s when Roosevelt had been President for a few years and the New Deal had been in place for a while. The cartoon shows Roosevelt operating leaky water pump, he is pouring in a lot of water, which represents taxpayers' money, but the pump is so leaky that only a small trickle of water is being poured into the New Deal bucket. Most of the water is gushing out of the leaks and there is a river running away from the pump down the hill with the label '16 billion dollars spent'. A poor, weary taxpayer is standing next to Roosevelt with buckets weighing him down and a large bucket resting on his head has the caption '7 thousand millions more'. ...read more.

timetable maybe for a bus or a train emphasizing the fact that his aim to get a car in every garage was not achieved for Hoover himself. Roosevelt is shown holding a large dustbin full of rubbish representing Hoover's policies, a sign with 'prosperity is around the corner', and the problems in America at that time, a scarecrow labeled 'ruined individual'. He is setting the dustbin out in the road for collection as someone who has just bought a new house might throw out belongings left by a previous owner, this is to show that Roosevelt is getting rid of Hoover's policies of no government intervention with the economy and that that prosperity would soon occur naturally. He also has his sleeves rolled up to show that he is ready and willing to work hard. There is also a caption at the bottom of the cartoon, which reads, "getting rid of the rubbish" to show that Roosevelt is getting rid of Hoover's do-nothing policies. ...read more.

The cartoonist is saying that despite all these agencies the Depression is still there and that the New Deal is ineffective. There is a speech bubble coming from Roosevelt, which says "Of course we may have to change remedies if we don't get results", Roosevelt is speaking to a Nurse representing Congress. This shows that the cartoonist believes that despite his previous methods not working Roosevelt is still willing to try and bring the Depression to an end and is willing to try again. Also showing Congress as a nurse helping Roosevelt could be showing that Congress supports Roosevelt and is willing to stand by him despite his New Deal being ineffective so far. Therefore I think that cartoon E is against Roosevelt because it is saying that his New Deal is ineffective and that he is wasting taxpayers' money. Cartoon F is supporting Roosevelt because it shows him as a President who will actively try to end the Depression. Cartoon G is both for and against Roosevelt because although it says that the New Deal is ineffective. ...read more.