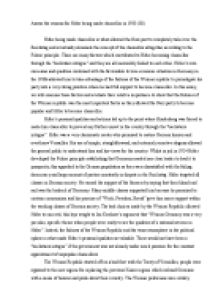 Assess the reasons for Hitler being made chancellor in 1933

﻿Assess the reasons for Hitler being made chancellor in 1933 (30) Hitler being made chancellor is what allowed the Nazi part to completely take over the Reichstag and eventually eliminate the concept of the chancellor altogether according to the Fuhrer principle. There are many factors which contributed to Hitler becoming chancellor through the ?backstairs intrigue? and they are all inexorably linked to each other. Hitler?s own successes and qualities combined with the favourable to him economic situation in Germany in the 1930s allowed him to take advantage of the failures of the Weimar republic to promulgate his party into a very strong position where he had full support to become chancellor. In this essay, we will examine these factors and evaluate their relative importance to show that the failures of the Weimar republic was the most important factor as they allowed the Nazi party to become popular and Hitler to become chancellor. Hitler?s personal qualities and actions led up to the point where Hindenberg was forced to make him chancellor to prevent any further unrest in the country through the ?backstairs intrigue?. Hitler was a very charismatic orator who promised to restore German honour and overthrow Versailles. ...read more.

The fact that Hitler only got five years in prison for creating the failed Munich Beer Hall Putsch displays that even the judiciary system was not ready to severely punish a person who went against the new democracy thus reinforcing the idea that negative opinion towards the Weimar government was within the government itself. By 1932 the economy was in a state of degradation and the abuse of article 48 by president Hindenburg was used to persuade him into appointing Hitler as chancellor to prevent any further unrest both within the Reichstag, since the NSDAP occupied the most seats and in the country, itself. As Wolfson states ?In the last resort, Hitler was not swept into power by the German people, nor was he democratically elected: he was put into power by backstairs intrigue?. Hitler was appointed chancellor in 1933 in a coalition government with Von Papen as vice chancellor. The absence of democratic election shows that the economic situation in the country played a heavy role in placing Hitler in position of chancellor. Without the economic crisis, the Nazi party might never have become the most popular party in Germany and the previous failures of the Weimar Republic could not have pressured the president to an extent where he was ready to name Hitler as chancellor. ...read more.

Hitler?s own successes and the previous failures of the Weimar republic proved not to be enough to gain a large enough amount of support due to the observed decrease in Nazi sentiment after the introduction of the Dawes Plan in 1924. By the summer of 1932 Hitler was the leader of the largest party in Reichstag with 230 seats. The economic crisis created the pressure Hindenburg was faced with in 1933 and therefore made Hitler chancellor through the ?backstairs intrigue?. In conclusion, Hitler was made chancellor in 1933 due to Hindenburg being pressured to do so to prevent unrest in the country mainly, because of the economic crisis that arose due to the Great Depression in the United States. The previous failures of the Weimar republic and created an atmosphere in Weimar Germany where people were appealed by Hitler?s ideas and Hitler?s own qualities and successes as a leader proved to be fundamental in reaching out to various sections of German society. However, it was the economic situation in Weimar Germany after the Great Depression in the US that allowed for Hitler to become chancellor in 1933 through the decision between Von Papen and president Hindenburg. ...read more.