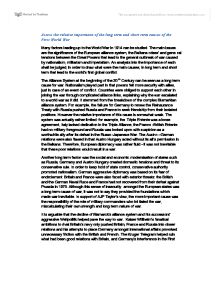 Assess the relative importance of the long term and short term causes of the First World War Many factors leading up to the World War in 1914 can be studied. The main issues are the significance of the European alliance system, the Balkans crises' and general tensions between the Great Powers that lead to the general outbreak of war caused by nationalism, militarism and imperialism. An analysis into the importance of each shall be judged, in order to draw what were the main causes, in long term and short term that lead to the world's first global conflict. The Alliance System at the beginning of the 20th Century can be seen as a long term cause for war. Nationalism played part in that powers felt more security with allies, just in case of an event of conflict. Countries were obliged to support each other in joining the war through complicated alliance links, explaining why the war escalated to a world war as it did. ...read more.

German aggressive diplomacy was based on its fear of encirclement. Britain and France were also faced with exterior threats: the British and the German Naval Race and France had not recovered from their defeat against Prussia in 1970. Although this sense of insecurity amongst the European states was a long term cause of war, it was not to say they provided the foundations which made war inevitable. In support of AJP Taylor's view, the more important cause was the responsibility of the role of military commanders who initiated the war, miscalculating their own strength and long term nature of war. It is arguable that the decline of Bismarck's alliance system and his successors' aggressive Weltpolitik helped pave the way to war. Kaiser Willhelm's fanatical ambitions to rival Britain's navy only pushed Britain, France and Russia into closer relations and his attempts to place Germany amongst international affairs provoked unnecessary friction with the British and French. ...read more.

As AJP Taylor states, the build up of international involvement in the war rose from long term internal weaknesses and desire for international power. In conclusion, the main long term causes of the war were the imperialistic and military natures of the Great Powers. The attempt to gain international prestige (particularly in the Balkans) was bound to lead to conflict. Although the Alliance system can be seen as a major factor, I think individual pacts of alliances grew stronger in response to foreign threats, particularly the aggressive nature of German expansionism. Therefore I don't this the Alliance System and its weak structure is as important as other causes. Obviously, the ultimate short term cause of war was the spark in the July Crisis, 1914. However, this escalation of the war was intricately linked to long term causes, such as the idea of going to war instead of risking national prestige. Finally, it is wrong to blame Germany for the ultimate cause of the war: responsibility should be chiefly held in the other Powers too, mainly Central, such as Austria and Serbia in their Balkans conducts. ...read more.