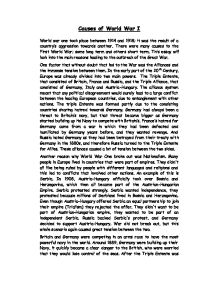 Causes of World War I World war one took place between 1914 and 1918; it was the result of a country's aggression towards another. There were many causes to the First World War; some long term and others short term

Causes of World War I World war one took place between 1914 and 1918; it was the result of a country's aggression towards another. There were many causes to the First World War; some long term and others short term. This essay will look into the main reasons leading to the outbreak of the Great War. One factor that without doubt that led to the War was the Alliances and the immense tension between them. In the early part of the 20th Century, Europe was already divided into two main powers. The Triple Entente, that consisted of Britain, France and Russia, and the Triple Alliance, that consisted of Germany, Italy and Austria-Hungary. The alliance system meant that any political disagreement would surely lead to a large conflict between the leading European countries, due to entanglement with other nations. ...read more.

An example of this is Serbia. In 1908, Austria-Hungary officially took over Bosnia and Herzegovina, which then all became part of the Austrian-Hungarian Empire. Serbia protested strongly. Serbia wanted independence, they protested because millions of Serbians lived in Bosnia and Herzegovina. Even though Austria-Hungary offered Serbia an equal partnership to join their empire (Trialism) they rejected the offer. They didn't want to be part of Austrian-Hungarian empire, they wanted to be part of an independent Serbia. Russia backed Serbia's protest, and Germany decided to support Austria-Hungary. War did not break out, but this whole scenario again caused great tension between the two. Britain and Germany were competing in an arms race to have the most powerful navy in the world. Around 1889, Germany were building up their Navy, it quickly became a clear danger to the British, who were worried that they would lose control of the seas. ...read more.

They did so by taking over Bosnia and Herzegovina in 1908. This greatly annoyed Serbia (who were supported by Russia) as many Serbians lived in Bosnia. War was inevitable now. In the capital of Bosnia, Sarajevo, on the 28th of June 1914, the heir to the Austrian throne, Archduke Franz Ferdinand was assassinated. He was killed by a young Serb nationalist, Gavrilo Princip. This was the potential spark that caused war to be declared. Even without this spark, it was just a matter of time until war broke out. Overall, there are many reasons why the war broke out, this essay covered the more important reasons. I think that the most important reason that led to the outbreak of the war were the different alliances, and the tension and entanglement between them. Due to all the tension build up between all the countries, war was bound to happen sooner or later, and did so, being sparked by the assassination of Archduke Franz Ferdinand. ...read more.