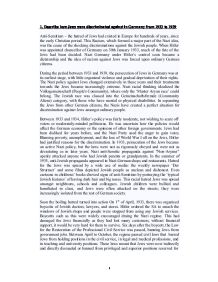 1. Describe how Jews were discriminated against in Germany from 1933 to 1939 Anti-Semitism - the hatred of Jews had existed in Europe for hundreds of years, since the early Christian period. This Racism, which formed a major part of the Nazi idea, was the cause of the shocking discriminations against the Jewish people. When Hitler was appointed chancellor of Germany on 30th January 1933, much of the fate of the Jews had been decided. Nazi Germany under Hitler's control soon became a dictatorship and the idea of racism against Jews was forced upon ordinary German citizens. During the period between 1933 and 1939, the persecution of Jews in Germany was at its earliest stage, with little organized violence and gradual deprivation of their rights. The Nazi policy against Jews changed extensively in these years and their treatments towards the Jews became increasingly extreme. Nazi racial thinking idealized the Volksgemeinschaft (People's Community), where only the 'Master Aryan race' could belong. The Jewish race was classed into the Gemeinschaftsfremde (Community Aliens) category, with those who have mental or physical disabilities. In separating the Jews from other German citizens, the Nazis have created a perfect situation for discrimination against Jews amongst ordinary people. Between 1933 and 1934, Hitler's policy was fairly moderate, not wishing to scare off voters or moderately-minded politicians. He was uncertain how the policies would affect the German economy or the opinions of other foreign governments. Jews had been disliked for years before, and the Nazi Party used the anger to gain votes. Blaming poverty, unemployment, and the loss of World War I all on the Jews, Hitler had justified reasons for the discrimination. In 1933, persecution of the Jews became an active Nazi policy, but the laws were not as rigorously obeyed and were not as devastating as in later years. Nazi anti-Semitic propaganda against "Non-Aryans" openly attacked anyone who had Jewish parents or grandparents. ...read more.

As the armies of the Allies closed in on the Germany at the end of 1944, the Nazis decided to abandon the extermination camps, moving or destroying evidence of the atrocities they had committed there. The Nazis marched prisoners, already sick after months or years of violence and starvation, for tens of miles in the snow to train stations. They were then transported for days at a time without food or shelter in trains with open carriages; and forced to march again at the other end to the new camp. Prisoners who lagged behind or fell were shot. The largest and best known of the death marches took place in January 1945, when the Soviet army advanced on Poland. Nine days before the Soviets arrived at the death camp at Auschwitz, the Germans marched 60,000 prisoners out of the camp toward Wodzislaw, thirty-five miles away, where they were put on trains to other camps. Around 15,000 died on the way. The extermination continued in different parts of Nazi controlled territory until the end of the Second World War, it only completely ended when the Allies entered Germany itself and forced the Nazis to surrender in May 1945. Few weeks after the liberation of the extermination camps, thousands continued to die from disease or malnutrition. By the end of the war, much of the Jewish population of Europe had been killed in the Holocaust. Poland, home of the largest Jewish community in the world before the war, had had over 90% of its Jewish population, or about 3,000,000 Jews, killed. Greece, Yugoslavia, Hungary, Lithuania, Bohemia, the Netherlands, Slovakia, and Latvia each had over 70% of their Jewish population destroyed. Belgium, Romania, Luxembourg, Norway, and Estonia lost around half of their Jewish population, the Soviet Union over one third of its Jews, and even countries such as France and Italy had each seen around a quarter of their Jewish population killed. ...read more.

The "White Rose" was an organization of university students in Munich, who disseminated anti Nazi pamphlets. The group's members drew attention to the atrocities being committed by Nazis and soldiers on the Eastern front. The organization was led by Hans Scholl, a 25-year-old soldier and student. While performing military service in the East, Hans witnessed the brutal military policy of Nazi Germany. Together with his sister, Sophie, and several fellow students, he began distributing a series of anti Nazi pamphlets. They spread copies of the leaflets throughout Hamburg and Munich. Hans and Sophie were caught on 18th February, 1943. They and several other members of the White Rose were subsequently executed. Similar groups included the Edelweiss Pirates, who acted in similar fashion of small acts of resistence. However, many were later caught and executed following their attacks on the chief of the Gestapo in Cologne. During the time of the oppressive Nazi regime, some brave people tried hard to help the persecuted, they include Swedish diplomat Raoul Wallenberg, who issued 4,500 protection passports to save Jews in Hungary, and German industrialist Oskar Schindler, who protected Jews working for him in Poland. However, a relatively small number of men and women risked their lives to help persecuted minority. From 1933 to 1941 opposition was limited because of both Nazi success and popularity but also because of the brutal intimidation of organised opposition e.g. banning of other political parties and trades unions May-June 1933, concentration camps, state police and party control. But most significant opposition occurred during the war years, though people of the opposition were dealt with severely e.g. the Edelweiss Pirates and White Rose group. The little result and success from these groups was probably because they did not work together so they were relatively weak. Moreover, even during the war most people supported the Nazis, fear of being caught opposing the Nazis was significant and also patriotic loyalty to the Fatherland in time of war was also a main factor. ?? ?? ?? ?? 1 ...read more.