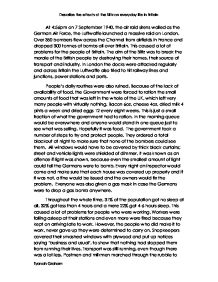 Describe the effects of the Blitz on everyday life in Britain

Describe the effects of the Blitz on everyday life in Britain

At 4:56pm on 7 September 1940, the air raid sirens wailed as the German Air Force, the Luftwaffe launched a massive raid on London.Over 350 bombers flew across the Channel from airfields in France and dropped 300 tonnes of bombs all over Britain. This caused a lot of problems for the people of Britain. The aim of the Blitz was to break the morale of the British people by destroying their homes, their source of transport and industry. In London the docks were attacked regularly and across Britain the Luftwaffe also tried to hit railway lines and junctions, power stations and ports.

People’s daily routines were also ruined. Because of the lack of availability of food, the Government were forced to ration the small amounts of food that was left in the whole of the UK, which left very many people with virtually nothing. Bacon 6oz, cheese 4oz, dried milk 4 pints a week and dried eggs 12 every eight weeks. This is just a small fraction of what the government had to ration. In the morning queue would be everywhere and anyone would stand in one queue just to see what was selling. Hopefully it was food.  The government took a number of steps to try and protect people. They ordered a total blackout at night to make sure that none of the bombers could see them.  All windows would have to be covered by thick black curtains; street and vehicle lights were shielded of dimmer. It was known as an offence if light was shown, because even the smallest amount of light could tell the Germans were to bomb. Every night an inspector would come and make sure that each house was covered up properly and if it was not, a fine would be issued and the owners would fix the problem.  Everyone was also given a gas mask in case the Germans were to drop a gas bomb anywhere.

Throughout the whole time, 31% of the population got no sleep at all, 32% got less than 4 hours and a mere 22% got 4-6 hours sleep. This caused a lot of problems for people who were working. Workers were falling asleep at their stations and even more were fired because they kept on arriving late to work. However, the people who did make it to work, never gave up they were determined to carry on. Shopkeepers covered their smashed windows with plywood and put up notices saying ‘business and usual’, to show that nothing had stopped them from running their lives. Transport was still running, even though there was a lot less. Postmen and milkmen marched through the rubble to make their deliveries, Clergymen held regular services in bombed churches, bomb sites were used as pen-air concerts and dances and many theatres, music halls and cinemas stayed open throughout the whole war. Even though people were moving on with their lives, over 1.4 million people had lost their homes and many had their friends killed or badly injured by the Blitz. This drove many people to theft. They would break into bombed factories and steal whatever they thought would have a value for money. They would then sell these items on for as much as they could and use that money to buy food if they could find it.  If anyone was caught, the punishment was death.

Even though there were two million Anderson shelters produced in the early years of the First World War, many people had no shelters to stay in while the bombs were taking place.  Many people moved in with family and friends where as others went to underground stations and stayed in the tunnels all night. They would stop the trains and the escalators from running so that people could sleep down there without any injuries. These tunnels gave the population the encouragement that they needed. Many people got a lot of sleep down there and even more were getting used to the bombs. However, the government were scared that people might not come back up again, because they were too scared, and tried to stop them, but each night up to 60,000 would demand to go down into the tunnels for protection. In the end the government gave up. So the Salvation Army and the Women’s Voluntary Service ran shuttle services of buns and drinks from station to station to keep them alive. Others would stay at home and hide in a Morrison’s shelter that was attached to the dining room table, or even hide under the stairs because they were designed to carry a heavy weight.

Day after day, night after night, so many fire services fought to control the many fires that were going on. Not including the regular fire services, there were 60,000 volunteers in the Auxiliary fire service. Many were on duty for two days in a row and had very little chance to get some sleep. Fire fighters were under constant heat and falling buildings, not to mention the falling bombs the surrounded them. They ran out of water quick because the bombs would hit the main pipe lines. There were also not enough fire trucks so people would have to run to the fire and hope to God that there was a water supply nearby. As people were pulling together and relying on themselves more, community sprit had increased so much throughout the whole of the Blitz. People went straight into action as soon as they heard the bombs going off. People helped the ambulances and the fire department. The heavy rescue squad used ropes and chains to clear away the rubble and then doctors and nurses would then run in and pull people out.

To sum up, many people’s lives had been ruined. Loss of family and friend, the loss of their homes, but people really did turn things around. The community really did join together to stick through the whole problem.