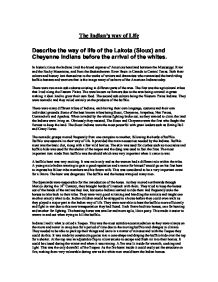 Describe the way of life of the Lakota (Sioux) and Cheyenne Indians before the arrival of the whites.

The Indian's way of Life Describe the way of life of the Lakota (Sioux) and Cheyenne Indians before the arrival of the whites. In historic times the Indians lived the broad expanse of Americas heartland between the Mississippi River and the Rocky Mountains, and from the Saskatchewan River Basin in Canada to Central Texas. Both their culture and history lent themselves to the works of writers and dramatists who romantised the hard riding buffalo hunters and warriors that is the image many of us have of the American Indians today. There were two main sub cultures existing in different parts of the area. The first was the agricultural tribes that lived along the Eastern Plains. The were known as farmers due to the area being covered in grass making it ideal land to grow their own food. The second sub culture being the Western Plains Indians. They were nomadic and they relied entirely on the products of the buffalo. There were many different tribes of Indians, each having their own language, customs and their own individual grounds. Some of the best known tribes being Sioux, Cheyenne, Arapahos, Nez Perces, Comanche's and Apaches. When invaded by the whites fighting broke out, as they wanted to claim the land the Indians were living on. Obviously they resisted, The Sioux and Cheyenne were the first who fought the fiercest to keep the land. The Sioux Indians were the most powerful with great leaders such as Sitting Bull and Crazy Horse. ...read more.

Items such as Teepee covers, bedding, general camping equipment, young children, the elderly and sick were carried on board. Young babies were carried by their mother in a Cradleboard on their back. Other small items were carried in a Saddlebag attached to the horse. The Plains baby was born within the Teepee. The women's relatives would be present but not the father or any other male. An aunt fed the baby for the first 4 days, after that the baby spent long hours in a moss packed buckskin bag laced to the cradleboard. Childhood was carefree. They were hardly ever-punished Small boys with miniature bow and arrows made life hell for the birds. Gangs of boys pelting one another with mud worked off high spirits. Indian children were raised to be prepared for adult life from an early age. By the age of 14 they were ready for marriage. Indian girls played with dolls and teepees to ensure they would be ready for motherhood and raising a family. They looked for a strong man, who was a good hunter and brave warrior. Indian men were very shy. To put across their interest for a girl they would play love songs on a flute, which included messages for them to meet. They would look for a squaw to be a good wife, mother and worker. Looks were also important as both the young males and females spent a lot of time on their appearance. ...read more.

Each tribe had its own chief. This position wasn't gained by family i.e. father to son, it was secured by a braves ability and daring. The chiefs took great pride in their wardress. The main part of which was the war bonnet. Each feather on the hat signified a different brave deed or victory won by the chief. Red Cloud has so many feathers he had to have a double tail. The women out of buffalo, deer and antelope skin made their clothes. The skin was scrapped, rubbed and cleaned. Elaborate patterns using coloured thread and beads, which were attached to the clothes/outfits which consisted of shirt, leggings and moccasins. When the berries were ripe the preparations for the Sundance began. This was a great ceremony for the renewal and prayers of blessings given by the Indian god 'Wakant Tanka' or 'Great Spirit'. This festival shown a form of self-sacrifice, which was not a punishment of any kind, it was actually a great honour. The festival lasted around four days during which the worshippers gazed towards the sun. The focal point was a sacred tree trunk to which the chosen one would be tied by ropes ending in wooden skewers thrust through the flesh of the chest. The danced and gazed at the sun until the flesh gave way. They wore the scars with pride. The pieces of flesh left behind would be an offering to the 'Great Spirit', asking him to take care of the tribe for the coming year. ?? ?? ?? ?? ...read more.

Final Comment. Star rating ***
This essay is very detailed and does describe a huge range of features of the Native American's way of life. It would be even better if at the start the writer had set out which aspects of their life they were going to examine. It would have been a good idea to focus on the aspects of their life that were significantly challenged by the arrival of the European settlers.