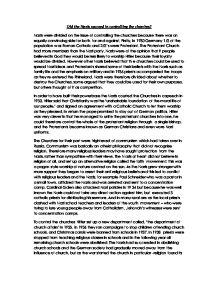 Did the Nazis succeed in controlling the churches?

Did the Nazis succeed in controlling the churches? Nazis were divided on the issue of controlling the churches because there was an equally convincing side for both for and against. Firstly, In 1930 Germany 1/3 of the population was Roman Catholic and 2/3's were Protestant. The Protestant Church had more members than the Nazi party. Nazis were of the opinion that if people believed in God they would be less likely to worship Hitler because their loyalty would be divided. However other Nazis believed that the churches could be used to spread Nazi ideas and Protestants shared some of their beliefs with the Nazis such as family life and the emphasis on military and in 1936 priests accompanied the troops as they re-entered the Rhineland. ...read more.

The Churches for their part were frightened of communism which had taken over in Russia. Communism was basically an atheist philosophy that did not recognise religion. Therefore many religious leaders may have sought protection from the Nazis, rather than sympathise with their views. The Nazis at heart did not believe in religion at all, and set up an alternative religion called the faith movement; this was a pagan style worship of nature centred on the sun. As the Nazis grew stronger with more support they began to assert their anti religious beliefs and this led to conflict with religious leaders and the Nazis, for example Paul Schneider who was a pastor in a small town, criticized the Nazis and was arrested and sent to a concentration camp. ...read more.

In 1938 priests were stopped from teaching religious classes in schools and in the following year all remaining church schools were abolished. The Nazis had succeeded in abolishing church schools and the German society had gradually moved away from the influence of church, but as the war started the church in particular-religion found its own needs among the soldiers and the relatives. Many people both Catholics and Protestants prevented the Nazis form moving crucifixes from churches. In conclusion the Nazis were initially successful but when the people and the religious leaders realised what the Nazis really stood for, they objected and fought back as best they could. So I do not think that the Nazis were entirely successful in controlling the churches. ?? ?? ?? ?? ...read more.