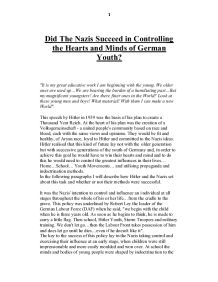 Did The Nazis Succeed in Controlling the Hearts and Minds of German Youth?

Did The Nazis Succeed in Controlling the Hearts and Minds of German Youth? "It is my great educative work I am beginning with the young. We older ones are used up...We are bearing the burden of a humiliating past...But my magnificent youngsters! Are there finer ones in the World? Look at these young men and boys! What material! With them I can make a new World". This speech by Hitler in 1939 was the basis of his plan to create a Thousand Year Reich. At the heart of his plan was the creation of a Volksgemeinschaft - a united people's community based on race and blood, each with the same views and opinions. They would be fit and healthy, of Aryan race, loyal to Hitler and committed to the Nazis ideas. Hitler realised that this kind of future lay not with the older generation but with successive generations of the youth of Germany and, in order to achieve this goal he would have to win their hearts and mind and to do this he would need to control the greatest influences in their lives... Home...School... Youth Movements... and utilising propaganda and indoctrination methods. In the following paragraphs I will describe how Hitler and the Nazis set about this task and whether or not their methods were successful. It was the Nazis' intention to control and influence an individual at all stages throughout the whole of his or her life...from the cradle to the grave. This policy was underlined by Robert Ley the leader of the German Labour Force (DAF) when he said, "we begin with the child when he is three years old. As soon as he begins to think, he is made to carry a little flag. Then school, Hitler Youth, Storm Troopers and military training. We don't let go...then the Labour Front takes possession of him and does let go until he dies...even if he doesn't like it". ...read more.

The membership of the Hitler Youth organisation grew steadily throughout the 1930's from 1 million in 1932 to 7 million, or 82% of the youth population, in 1939. The emphasis was on fun and exciting activities but with a military bearing. There was marching in parades with bands. Summer camps that prepared boys for camping out doors. They would also have been taught how to map-read and clean and look after a rifle. Fitness and cross-country running would have been high on the agenda. In between these activities their leisure time was devoted to reading and learning about Hitler and the Nazis. They would read propaganda newspapers such as Die Sturmer and Hitler's autobiography 'Mein Kampf', followed by tests. However, before they were allowed to take part in these activities they had to take the oath "I promise always to do my duty in the Hitler Youth, in love and loyalty to the Fuhrer, to do my duty, so help me God, at all times". In the League of German Maidens the girls did similar things but there was also an emphasis on preparing themselves for motherhood. During the early 1900's the population of Germany, and other European countries had reduced because of contraception and women wanting to work and it was imperative that the German population was increased to provide the workers and soldiers that were needed for the Nazis plans. The girls were told that in common with the Fuhrer's own mother they were Germany's hope and future. Before membership of the Hitler Youth became compulsory it is difficult to generalise on why German youth joined the various factions of the Hitler Youth. Different ones joined for different reasons and got different things out of it. Just because they raised their right hands and took the oath does not mean to say that they were thinking of the Fuhrer and of serving the German people. ...read more.

no one in our class ever read Mein Kampf...we didn't know much about Nazi ideology...even anti-Semitism was rather marginal at our school..." perhaps it is true. Perhaps, looking back they are shocked by the part they played even though it was unintentional and indirect. Maybe they were afraid of speaking out against the Nazis, afraid of the consequences of what the Gestapo might do, as the Social Democratic Party reported at the time, possibly for other political motives, as the SDP was a banned party under Hitler. What do we believe? Who do we believe? For myself I agree with M. Housden, who many years after that period when more facts and information had become available and when people could look back and think about what happened and why in a rational and calm manner, when he summarised the reasons for the support of the Nazis as follows: - " There were all manner of reasons for youngsters to support the Third Reich. National Socialism provided a vehicle for conflict between generations. It could be dynamic, exciting and purposeful. Youngsters were socialised into National Socialist ways at school and in the Hitler Youth. When all else failed they could be intimated. What is more, the longer the Nazi system was in place, the more hazy became the memories of younger Germans of the days before Hitler. Eventually youngsters knew no alternative. And yet, despite all this, support for Hitler was less than total." So all in all I would agree that Hitler did in fact win over many of the German youths Hearts and Minds. Throughout the Hitler Youths games and sports slowly and surely military training was pushed in with propaganda, he slowly indoctrinated them to be obedient and not question their commands and he made them patriotic towards Germany, and through this he won over their souls, their hearts and their minds and some even fought for him until the bitter end through love to the Fuhrer. -'Youth For The Fuhrer' 1 ...read more.