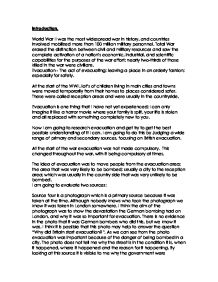 Introduction. World War II was the most widespread war in history, and countries involved mobilized more than 100 million military personnel. Total War erased the distinction between civil and military resources and saw the complete activation of a nation's economic, industrial, and scientific capabilities for the purposes of the war effort; nearly two-thirds of those killed in the war were civilians. Evacuation - The act of evacuating; leaving a place in an orderly fashion; especially for safety. At the start of the WWII, lot's of children living in main cities and towns were moved temporarily from their homes to places considered safer. These were called reception areas and were usually in the countryside. Evacuation is one thing that I have not yet experienced; I can only imagine it like a horror movie where your family is split, your life is stolen and all replaced with something completely new to you. Now I am going to research evacuation and get try to get the best possible understanding of it I can. I am going to do this by Judging a wide range of primary and secondary sources, focusing on British evacuation. At the start of the war evacuation was not made compulsory. This changed throughout the war, with it being compulsory at times. ...read more.

I think that some emotion is shown in the source through the words used. I think that at first the children though that evacuation was going to be easy. As you can see from source 5 the girl in the photo seems very happy and excited about evacuation. This source is a primary source because it was taken at the time. I do not know who took the photo but I know the important bit that it is a middle class girl, so we know she is from a wealthy family. I don't think there was an aim for the photo when it was taken, I think it was a parent taking a photo of their child as they leave. I think that this tell me that evacuation is made out to children that it is a great thing. The picture cannot tell me who took it, where it was taken, and to which reception the child was going to. This picture can be biased because it is not showing an experience of a rich girl. I think that this source has allot of emotion showing in it. There are children with 'huge smiles on there faces showing greater amounts of happiness. And is reliable. ...read more.

In some cases evacuation would not of been pleasant for all evacuees and hosts. The hosts would of possibly looked at the evacuees as a burden who run wild, are rude and smell bad. The evacuees would not want to live with the hosts... They would not be used to country life and would want to live with there 'real' parents. But on the other hand evacuation would have been a good thing for the hosts and evacuees. The hosts will have been happy to have some 'fun' company and the evacuees would have loved the country life. If I was a historian looking to answer the question 'What were the effects of evacuation?' I don't think it would be a relatively hard task because I think that there is a lot of reliable sources as you can see from the sources I have evaluated above. But I think every source would have to have a detailed evaluation because it is very hard to tell how reliable a source is until it has been evaluated well. I don't think I could say whether evacuation was pleasant because some sources tell me it was and others tell me it wasn't. I think that it is one of those things that have to be experienced in order to make a judgement and I think that nobody will have the same experience and therefore the same judgement. ...read more.