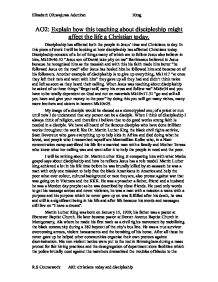 Explain how this teaching about discipleship might affect the life a Christian today.

AO2: Explain how this teaching about discipleship might affect the life a Christian today. Discipleship has affected both the people in Jesus' time and Christians to day. In this piece of work I will be looking at how discipleship has affected Christians today. Discipleship consists of a lot of things many of which are to follow Jesus also believe in him, Mk10v46-52 "Jesus son of David take pity on me" Bartimeaus believed in Jesus because he recognised him as the messiah and with this his faith made him better "he followed Jesus on the road" after Jesus has healed him he followed him and became on of his followers. Another example of discipleship is to give up everything, Mk1v17 "at once they left their nets and went with him" they gave up all they had and didn't think twice and left as soon as they heard their calling. When Jesus was teaching about discipleship he asked of us these things "forget self, carry his cross and follow me" Mk8v34 and you have to be totally dependent on God and not on materials Mk10v17-31 "go and sell all you have and give your money to the poor" by doing this you will get many riches, many more brothers and sisters in heaven Mk10v29. ...read more.

He helped the poor even when he was going around giving his speeches to people he gave up some of his time to help the poor Mk2v17 2 "I have not come to call respectable people". Jesus taught his disciples to care for the sick and needy He knew that his efforts will make his dreams come true but knew that he might not be there to see it but he know it will come "I might not be there to see it with you. But I have seen it over the mountain tops free at last free at last thank God almighty we are free at last" these were words of martin Luther King himself the speech he gave the day before he died. Dr Martin Luther King was a doer he did a lot he gave up quality family times with his kids to pursue his mission for Freedom. Martin Luther King's as a disciple reflects mark's teaching about discipleship. He believed in what he was doing, he knew that what he was doing was the right thing so he believed that if he carried on his teaching he will get there in the end Mk5v28 "if I just touch his clothes I will get better". ...read more.

He was also resurrected like Jesus did but in a different way the Martin Luther king annual holiday on the 1st of January, the whole day has been devoted to him to remember all the good he did and to show him that his determination and death paid off. The Martin Luther King peace price given to someone every year who has reflected themselves to be a role model of him and the friends and family reunion. This is to a sign that the good deed he did will never be forgotten. He was assassinated for challenging the governments, in Jesus' case he was crucified because that was the type of messiah he was Suffering Servant also because he challenged the teachers of the law Mk2v10 "I will prove to you then that the son of man has authority on earth to forgive sins". For these they were both killed. A man like Dr. Martin Luther King has proved that in this cruel Morden day world we live in some men do reflect a role, model of Jesus and can be compared to the teachings of discipleship. ?? ?? ?? ?? Elizabeth Oluwajuwa Adeniran 10mg R.S Coursework A02: christians today and discipleship ...read more.