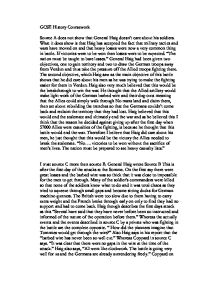 GCSE History Coursework Source A does not show that General Haig doesn't care about his soldiers. What it does show is that Haig has accepted the fact that military tactics and wars have moved on and that heavy losses were now a very common thing in battle. If victories were to be won then losses were to be expected. "The nation must be taught to bare losses." General Haig had been given two objectives, one to gain territory and two to draw the German troops away from Verdun and thus take the pressure off the Allied troops fighting there. The second objective, which Haig saw as the main objective of this battle shows that he did care about his men as he was trying to make the fighting easier for them in Verdun. Haig also very much believed that this would be the breakthrough to win the war. He thought that the Allied artillery would make light work of the German barbed wire and their dug-outs meaning that the Allies could simply walk through No mans land and claim them, then set about rebuilding the trenches so that the Germans couldn't come back and reclaim the territory that they had lost. Haig believed that this would end the stalemate and ultimately end the war and as he believed this I think that the reason he decided against giving up after the first day when 57000 Allies were casualties of the fighting, is because he thought that this battle would end the war. ...read more.

Yet Source G claims that the Battle of the Somme, "Had no great importance in the strategic sense, its consequences nevertheless were great". So source G is saying that its not the strategy involved with which Source F so actively takes apart, but the fact that the Western Powers gained "confidence" and that they had "accomplished an achievement that gave good promise for the future". We also need to look at where the sources come from. Source F is from a book named 'British Butchers and Bunglers of World War' Haig has been included in this and I'm sure so that it sounds more dramatic and so appeals to more readers they exaggerated greatly what actually happened. Therefore this source is not very reliable. Source G is written from the German prospective and so would be slightly biased towards themselves, yet this source seems to be quite reliable as it agrees with the history of what happened and seems to fit in nicely it also agrees with source H. Source H is written by a British general who fought in both world wars. This source is most reliable of the three as he is saying what he thinks Haig was like, what the battle was like and he was there and gives a first hand eyewitness account which is always the most reliable. ...read more.

In source C a private claims that anyone would know that they couldn't get through the barbed wire, "Any Tommy could have told them that shell fire lifts wire up and drops it down, often in worse tangles then before". Although the other side of the coin is that he may have believed that was he was doing was right and simply that he overlooked the tactics or was unsure to what tactics to use as technology had changed and with it so had tactics. For example they expected cavalry to play a major part in the war and yet it didn't. I personally think the latter. I believe Haig generally thought that what he was doing was right and would break the stalemate. I think that he was unsure of what tactics to use and therefore got it wrong which was a big error but not totally his fault. Therefore it is impossible to say that he was an, "uncaring general". As for the sacrifice of soldier's lives for no good reason this statement is also false. This battle killed many great German soldiers and they had bad morale after the battle knowing that they could be defeated. Even though Lloyd George claims that it was only the fact that the Americans joined in that won the war for them, the Somme played a role in the defeat of the Germans and the breakthrough of the stalemate that would not have happened without it. It eased pressure on other Allied troops, which boosted their morale and overstretched the German forces. ...read more.