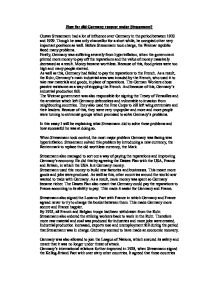 Germany - How far did Germany recover under Stresemann?

How far did Germany recover under Stresemann? Gustav Stresemann had a lot of influence over Germany in the period between 1923 and 1929. Though he was only chancellor for a short while, he occupied other very important positions as well. Before Stresemann took charge, the Weimar republic faced many problems. Firstly, Germany was suffering severely from hyperinflation, when the government printed more money to pay off the reparations and the value of money massively decreased as a result. Money became worthless. Because of this, food prices were too high and many people starved. As well as this, Germany had failed to pay the reparations to the French. As a result, the Ruhr, Germany's main industrial area was invaded by the French, who used it to take raw materials and goods, in place of reparations. The German Workers chose passive resistance as a way of stopping the French. And because of this, Germany's industrial production fell. The Weimar government was also responsible for signing the Treaty of Versailles and the armistice which left Germany defenceless and vulnerable to invasion from neighbouring countries. They also used the Free Corps to kill left wing extremists and their leaders. ...read more.

Germany's international relations further improved in 1928, when Stresemann signed the Kellog-Briand Pact with over sixty other countries. It agreed that these countries would never go to war against each other. This was good for Germany because it was now more secure and no longer vulnerable to invasion (due to the Treaty of Versailles which had stripped Germany of the majority of its armed forces). Most of Germany's problems seemed to have now been solved under Stresemann and there was economic stability and security from invasion. Because of this, support for extremist groups, which had been high during hyperinflation, declined. The Weimar government gained popularity instead. Due to Stresemann, Germany also seemed to be politically stable. Another result of Germany's stability (economic and political) was that culture in Germany flourished. Artists and writers were free to express themselves in their art and literature as there was little censorship. Architecture in Germany also bloomed and there was a massive increase of entertainment, with more emphasis on sex. Artists flocked to Berlin, which soon became the pleasure capital. The number of caf�s and nightclubs also increased. This all made Germany even richer as it attracted more tourists. ...read more.

This was dangerous as these people were also more likely to support right-wing extremist groups who wanted to set up a strict, disciplined dictatorship with one strong, authoritative leader. With the support of these people, some of whom might also be well-educated, right-wing extremists could become a threat to the Weimar Republic. In conclusion, Germany had recovered under Stresemann but only to some extent as it seemed as though Stresemann was only containing the many problems Germany faced and making sure they didn't escape and worsen. One area Stresemann was successful in however, was improving international relations, as he made peace with over sixty other countries including France with the Kellog-Briand and Locarno Pact. He had also managed to stop hyperinflation successfully and due to Germany's improved international relations, he increased industrial production in the Ruhr. However, some of his solutions were only good in the short term, such as the Dawes Plan and the way he had decided to deal with extremist groups. These solutions together could easily cause the downfall of the Weimar Republic, at the smallest mishap. Stresemann himself said about Germany's economy, "The economic position is only flourishing on the surface. Germany is in fact dancing on a volcano. If the short-term credits are called in, a large section of our economy would collapse." ?? ?? ?? ?? ...read more.