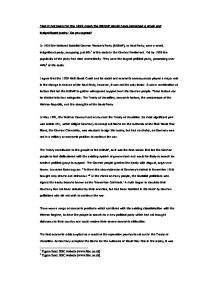 'Had it not been for the 1929 crash the NSDAP would have remained a small and insignificant party.' Do you agree?

'Had it not been for the 1929 crash the NSDAP would have remained a small and insignificant party.' Do you agree? In 1924 the National Socialist German Worker's Party (NSDAP), or Nazi Party, were a small, insignificant party, occupying just 6%1 of the seats in the German Parliament. Yet by 1933 the popularity of the party had risen dramatically. They were the largest political party, possessing over 44%2 of the seats. I agree that the 1929 Wall Street Crash and its social and economic consequences played a major role in the change in fortune of the Nazi Party, however, it was not the only factor. It was a combination of factors that led the NSDAP to gather widespread support from the German people. These factors can be divided into four categories: The Treaty of Versailles, economic factors, the weaknesses of the Weimar Republic, and the strengths of the Nazis Party. In May 1991, the Weimar Government announced the Treaty of Versailles. Its most significant part was Article 231, which obliged Germany to accept full blame for the outbreak of the First World War. Ebert, the German Chancellor, was reluctant to sign the treaty, but had no choice, as Germany was not in a military or economic position to continue the war. ...read more.

In 1929, a second economic disaster occurred, the American Stock Market crashed, spiralling the United States into economic depression. Within a very short space of time countries around the world began to feel the devastation of the depression. In Germany the results were catastrophic, resulting in the collapse of the German economy. Germany was strongly affected as it depended upon the Dawes plan for loans from the USA to help repay the reparations set by the Treaty of Versailles. Alan Bullock describes the depression's effects in 'Hitler and Stalin': "In the early 1930s, millions of German men and women felt like the survivors of an earthquake starting to put their homes together again, only to see the fragile network of their lives cracking and crumbling around them a second time."5 The Depression created unprecedented levels of unemployment; by 1932 the total reached 6,000,000. The depression also produced "cuts in salaries and wages, and a dramatic rise in the number of bankruptcies."6 The Depression was vital in increasing support for the Nazis. It "took the Depression to convert a trickle of middle class support into a flood."7 As more and more people became increasingly more desperate they became more ready to listen to Hitler. ...read more.

socialism on the left."11 The NSDAP asserted it was the only party possessing enough strength to oppose the communist threat, and therefore, the only party who could prevent the upper classes losing their wealth, which would occur if a communist revolution took place and businesses were nationalised. In addition, the party also "used several more general policies as a means of cutting through class differences."12 The most important of these was a response to the depleted national pride created by Treaty of Versailles, their "promise to return a divide nation the lost sense of its own greatness and power"13 Laurence Rees argues another "popular way of explaining the Nazi's rise to power is through the character of Hitler."14 Hitler, NSDAP leader, possessed extraordinary oratorical abilities. He conveyed the party's political ideas with such emotional force that the German public were compelled to listen. Therefore, although the NSDAP's political ideas had the potential to appeal to the masses, they may have gone unnoticed if it wasn't for Hitler's oratorical skills. In conclusion, The 1929 crash and its consequences did play a major part in persuading people to support the NSDAP, but it was not the only factor; it was a culmination of many factors that elevated the NSDAP from a small, insignificant party to the largest in the Reichstag. ...read more.