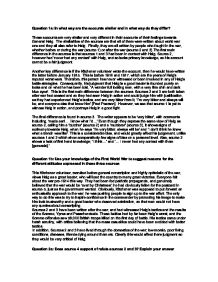 Question 1a: In what way are the accounts similar and in what way do they differ? These accounts are very similar and very different in their accounts of their feelings towards General Haig. The similarities of the sources are that all of them were written about world war one and they all also refer to Haig. Finally, they are all written by people who fought in the war, whether before or during the war (source 1) or after the war (source 2 and 3).The first main difference in the sources is that sources 1 and 3 had been in contact with Haig. Source 2, however had 'never had any contact' with Haig, and so lacks primary knowledge, so his account cannot be a fair judgment. Another key difference is if the Kitchener volunteer wrote the account, then he would have written the letter before January 1915. This is before 1916 and 1917, which are the years of Haig's reputed worst wars. Therefore, this person has never witnessed or been involved in any of Haig's battle strategies. Consequently, his judgment that Haig is a good leader is founded purely on looks and on what he has been told, "A wonder full looking man, with a very firm chin and dark blue eyes'. ...read more.

The writers might have forgotten key facts, and might have felt resentment that Haig was rewarded when the war ceased. Source 2 is obviously quite unreliable, as he appears to be drawing almost all of his conclusions about Haig from what he thinks to be true; 'I don't know anything about generals'. This confirms the narrower perspective that the soldiers had as mentioned earlier. Source 3 reiterates what four (a private letter from Haig to his wife) says; 'I don't think he knew what a trench was like' and '... don't know anything about generals'. It is possibly even more unreliable than source 2, as there is a further element of bias. In addition, there is the fact that they do not know for sure whether their statements are true. He says 'I'm very bitter' and gives negative comments on his post-war rewards (or lack of). Even more ambiguous, source 4 (a prime example of censorship) is very unreliable. When writing to his wife, Haig would have known it foolish to write 'Today, I killed ten of thousands of men and I have thought nothing more of it'. He would not have received a warm reception by his wife (and others who would view the letter) upon arrival back home. ...read more.

Moreover, it was certainly the answer to barbed wire and other defenses put into place by the Germans to slow British advances. This would have delivered a huge blow on German morale. Also, back at home, seeing pictures of the potentially war winning weapon would have greatly strengthened the morale back at home; giving support from the public. Pictures of the tanks would have been shown in the cinemas, which made the viewers think they had a chance of winning, so recruitment went up. After reconsideration, the tank at the time would have seemed a justified course of action. However, after a while, the Germans eventually realised the tanks' flaws, finding strategies for defeating the tanks, and creating blue prints for their own tanks. Also, I believe strongly that Haig was not at fault for using the tanks at that stage of the war, but it was the way they were used. It was thought that if the artillery bombarded the enemies defenses, the tanks would be able to steam right through them. In reality, the artillery shells created giant craters, and turned up mud in which the eventually the tanks would be stuck, or 'bogged down' until they were 'knocked out' with relative ease by the Germans. 5. These sources are taken from a novel, a song, and a poem. How reliable are they as evidence about the role of generals during the war? Explain your answer. ...read more.