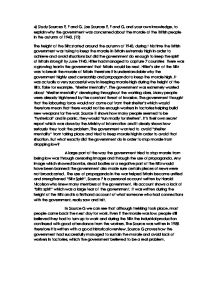 Source E shows how many people seemed to be "hysterical" and in panic, they would "run madly for shelters". It's their own secret report which was done by the Ministry of Information and it clearly shows how seriously they took the problem. The government wanted to avoid "shelter mentality" from taking place and tried to keep morale high in order to avoid that situation. But what exactly did the government do in order to stop morale from dropping low? A large part of the way the government tried to stop morale from being low was through censoring images and through the use of propaganda. Any image which showed bombs, dead bodies or a negative part of the Blitz would have been banned; the government also made sure certain pieces of news were not broadcasted. ...read more.

In Source G we can see that although trekking took place, most people came back the next day for work. Even if the morale was low, people still believed they had to turn up to work and during the Blitz the industrial production continued with good attendance from the workers. The Source was written in 1988 therefore it is written with a good historical overview. Source G proves how the government had successfully managed to sustain the morale and avoid lack of workers in factories, which the government believed to be a real problem. In conclusion, the government was concerned about British morale as if it was low then that would mean many disastrous things would take place like "shelter mentality" and letting Hitler achieve his aim. ...read more.

The student's response to the question is explicit but there is a lack of developing the ideas and examples made (which in turn, creates the idea of asserting points). Whilst assertion of points is not heavily criticised at GCSE level, ...

The student's response to the question is explicit but there is a lack of developing the ideas and examples made (which in turn, creates the idea of asserting points). Whilst assertion of points is not heavily criticised at GCSE level, it helps the structure and clarity of the essay if assertions are avoided by fully developing the idea supported with examples. The introduction and conclusion show a clear understanding of the question set and the student meets the requirements of addressing all three sources mentioned however the 'own knowledge' does not seem overly apparent in the essay. This said, I don't know what the sources were and can only guess that the majority of what is said in the essay is inferred from the source and not further developed in some cases. There were some very vague ideas such as "many disastrous things" 'floating' around in the essay which is also best avoided as it shows the lack of confidence in the argument along with the lack of 'own knowledge'. In regards to lack of developing ideas, the censorship from the government is best explained by the fact that the death toll was steadily climbing along with the frustration from the public towards war. Thus this brings in 'own knowledge' along with developing the ideas from the source further.

The ideas that the student did develop in this essay were very good. The essay does not lack source analysis and evaluation but that extra step of bringing in 'own knowledge' would have gained the student the top marks. However, it was clear from the introduction the line of argument that the student was to take and it was very strongly sustained throughout the essay. This said, perhaps it was because everything was said in the introduction that the conclusion did not seem to do very much for the essay apart from telling the examiner the essay was complete. It is always best to try and keep the introduction and conclusion of a balanced length. Also, the student should avoid asking questions within the essay and stating the obvious from the question set. It is obvious that the essay should address the question and perhaps suggest a main reason / cause - this does not need to be repeated in coursework as it just eats up the precious word count.

The spelling, grammar and punctuation had a few questionable places. Though nothing major, one should make sure that they always check through their work as such 'silly mistakes' do not leave a good impression to the examiner and spoils a high standard essay. The technical terms used in the essay were appropriate and the student follows typical conventions in regards to the structure of the essay. On the other hand, I should note that it is not necessary to write the word Source every time. It is ok to write 'E is an account ....' rather than 'Source E is an account'. This again helps the word count.