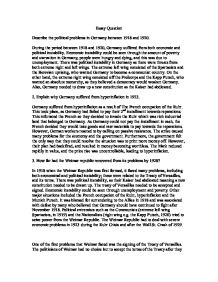 Essay Question Describe the political problems in Germany between 1918 and 1920. During the period between 1918 and 1920, Germany suffered from both economic and political instability. Economic instability could be seen through the amount of poverty and starvation in Germany, people were hungry and dying, and this was due to unemployment. There was political instability in Germany as there were threats from both extreme right and left wings. The extreme left wing consisted of the Spartacists and the Berevian uprising, who wanted Germany to become a communist country. On the other hand, the extreme right wing consisted off the Freikorps and the Kapp Putsch, who wanted an absolute monarchy, as they believed a democracy would weaken Germany. Also, Germany needed to draw up a new constitution as the Kaiser had abdicated. 2. Explain why Germany suffered from hyperinflation in 1923. Germany suffered from hyperinflation as a result of The French occupation of the Ruhr. This took place, as Germany had failed to pay their 2nd installment towards reparations. This infuriated the French so they decided to invade the Ruhr which was rich industrial land that belonged to Germany. As Germany could not pay the installment in cash, the French decided they would take goods and raw materials to pay towards the reparations. However, German workers reacted to by calling on passive resistance. The strike caused many problems for the economy and the government. ...read more.

This meant that all the governments were coalitions put together from several political parties. This led to weak governments as they found it very difficult to agree on policies. This also encouraged the growth of extremist parties such as the Communists because they knew they might be able to gain seats in Parliament, and therefore have a say in the running of the country. The Weimar Republic suffered from both economic and political instability. Economic instability could be seen through poverty and starvation. The unemployment rate was very high, as jobs were hard to find. Weimar also faced many political problems as threats from both extreme left and right wings were being received. The extreme left wing consisted of the Spartacists and Bavarian Uprising, who wanted Germany to be a communist country. On the opposing side were the Freikorps and the Kapp Putsch, who wanted an absolute dictatorship, where there would be a Keiser. The Treaty of Versailles had ordered that Germany pay reparations of �6.6 million. The Germans paid the first instalment of this bill in 1921 but then failed to pay their second instalment. The French were infuriated as they required the payment and invaded the Ruhr which was rich industrial area belonging to Germany, to take what they were owed by force. ...read more.

Any plan he carried out was to bring in new currency in order to solve the economic problems. He introduced a new currency called the Rentenmark, and destroyed the old mark. This restored confidence back into Germany, and things slowly become better. There was evidence that the Weimar Republic had recovered, this could be seen through the period of Prosperity, which lasted from 1924 to 1929. There was a lot of cultural revival, where artists, writers and poets flourished. Business boomed and industry was doing incredibly well. There was economic and political stability, as there were no threats from other political parties. There were lots of jobs, and people received higher and disposable wages, meaning they had more money to spend on their social lives. Eventually Germany had been invited to join the League of Nations in 1926. Germany seemed to have had recovered well from its previous problems, its threats had been crushed, loans had been taken out and all problems were effectively sorted. In conclusion to this, we can see that Germany had recovered to some extent. As it had resolved its economy and political stability, as well as restore its confidence back. However there is an argument that the country went through false prosperity, as it was based on American loans. Even though the country had recovered by 1928 there were futher problems just round the corner, including the Wolf Street Crash, which lead to a worldwide depression and masses of job losses. ...read more.