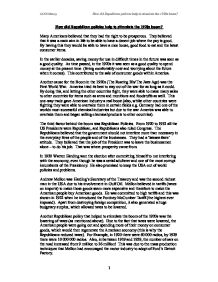 How did Republican policies help to stimulate the 1920s boom?

How did Republican policies help to stimulate the 1920s boom? Many Americans believed that they had the right to be prosperous. They believed that it was a main aim in life to be able to have a decent job where the pay is good. By having this they would be able to have a nice house, good food to eat and the latest consumer items. In the earlier decades, saving money for use in difficult times in the future was seen as a good quality. As time passed, in the 1920s it was seen as a good quality to spend money at the present time (living comfortably now and worrying about the future when it comes). This contributed to the sale of consumer goods within America. Another cause for the Boom in the 1920s (The Roaring 20s/The Jazz Age) was the First World War. America tried its best to stay out of the war for as long as it could. By doing this, and letting the other countries fight, they were able to make many sales to other countries for items such as arms and munitions and foodstuffs as well. ...read more.

He also promised to keep the USA out of world policies and problems. Andrew Mellon was Harding's Secretary of the Treasury and was the second richest man in the USA due to his involvement in Gulf Oil. Mellon believed in tariffs (taxes on imports) to make those goods seem more expensive and therefore to make the American people buy American goods. He was committed to high tariffs and this was shown in 1922 when he introduced the Fordney McCumber Tariff (the highest ever imposed). Apart from destroying foreign competition, it also generated a huge budgetary surplus, which allowed taxes to be lowered. Another Republican policy that helped to stimulate the boom of the 1920s was the lowering of taxes (as mentioned above). Due to the fact that taxes were lowered, the American people were going out and spending more of their money on consumer goods, which would then regenerate the American economy (this is why the Republicans reduced taxes). For Example, in 1920 there were 60 000 radios, by 1929 there were 10 000 000 radios. ...read more.

Because cars were now available, mail order catalogues were being created, as easy delivery was possible. All this development was due to the mass production idea of Henry Ford which was then encouraged by the Republican Andrew Mellon. So to summarise, Republican policies helped to stimulate the 1920s boom because tariffs were introduced which made foreign goods less desirable and therefore the people were more attracted to American products. Also, taxes were lowered, as the Republicans knew that the people would go out and spend their extra money on American goods that would then regenerate the economy. However, I believe that the greatest cause for the boom was the encouragement of mass production lines to the entire motor industry by Andrew Mellon, which was already being used in Henry Ford's Detroit factory. This caused many more cars to be produced and many more to be bought. This led to a massive change of events and encouraged other industries such as petroleum to prosper as well. Cities grew larger because of this common transport link and this too, helped to boost the American economy in the Roaring 20s. GCSE History How did Republican policies help to stimulate the 1920s boom? 1 ...read more.