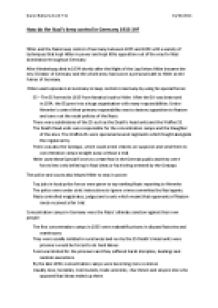 ﻿Daniel Battams-Scott T11 14/03/2011 How do the Nazi?s keep control in Germany 1933-39? Hitler and the Nazis keep control of Germany between 1933 and 1939 with a variety of techniques that kept Hitler in power and kept little opposition out of the way for Nazi domination throughout Germany. After Hindenburg died in 1934 shortly after the Night of the Log Knives Hitler became the new Dictator of Germany and the whole army had sworn a personal oath to Hitler as the Fuhrer of Germany. Hitler used repression in Germany to keep control in Germany by using his special forces: SS ? The SS formed in 1925 from fanatics loyal to Hitler. After the SA was destroyed in 1934, the SS grew into a huge organisation with many responsibilities. Under Himmler?s control their primary responsibility was to destroy opposition to Nazism and carry out the racial policies of the Nazis. There were subdivisions of the SS such as the Death?s head units and the Waffen SS. The Death Head units were responsible for the concentration camps and the Slaughter of the Jews. The Waffen-SS were special armoured regiments which fought alongside the regular army. There was also the Gestapo, which could arrest citizens on suspicion and send them to concentration camps straight away without a trial. ...read more.

Some groups such as the Swing movement and the Edelweiss Pirates resented and resisted Nazi control of their lives. The youth rebels mainly disobeyed the laws of the Nazis, mainly by having parties and listening to banned jazz music and danced to American music. The Nazis combated these groups by arresting them and publicly hanging them to send out the message to the people that the Nazis would not tolerate such actions. This helped Hitler to stay in control as it sent fear into the German public as well as reducing the amount of rebels so other children would not be drafted into the illegal groups. Churches: Hitler had tried to get all the churches to form into one official Reich church. Hitler encouraged an alternative religion to the traditional religion, the German Faith Movement. There were large protests against this and of the Nazis action such as the killing of people with disabilities or the mentally ill. Many of these protestors were silenced, but some such as the Catholic Bishop Galen criticised the Nazis throughout the 1930?s but the Nazis thought it would be too risky to silence him while German was in the war because he has had such a large group of strong supporters and followers. ...read more.

The SA and SS were also boycotting Jewish shops and businesses, which were then marked with the Star of David and advised German people not to use them. Kristallnacht On November 1938 a young Jew killed a diplomat in Paris. Goebbels saw this as a chance to regain Hitler?s favour. There was a brutal response to the killing and SS troopers smashed Jewish shops and businesses. Ninety-one Jews were murdered and hundreds of synagogues were burned, twenty thousand Jews were taken to concentration camps and thousand more left the country. Hardly anyone protested against these actions but the few that did were brutally murdered. There was little opposition in Germany because of the fear of the SS and Gestapo and how you would be treated if you spoke out. Many people had been scared into submission so the Nazis could keep power and control with hardly any interference. Many Germans feared that they would lose their jobs if they spoke out so many kept quiet. Propaganda also helped that Germans found out very little about the bad things that were happening in Germany. Nazi successes also helped Hitler keep control such as: Economic recovery that was deeply appreciated. Bringing back discipline to Germany. Foreign affairs convinced other nations that they were a strong country. ...read more.