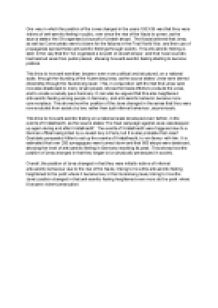 How did the position of the Jews in Nazi Germany change in the years 1933-45?

Transfer-Encoding: chunked ﻿One way in which the position of the Jews changed in the years 1933-39 was that they were victims of anti-semitic feeling in public, ever since the rise of the Nazis to power, as the source states ?the SA organised a boycott of Jewish shops?. The Nazis believed that Jews, as well as Communists were to blame for the failures in the First World War, and their use of propaganda spread these anti-semitic feelings through society. ...read more.

This, in conjunction with the fact that Jews were now also disallowed to marry Aryan people, shows the Nazis efforts to exclude the Jews, and to create a racially pure Germany. It can also be argued that this also heightened anti-semitic feeling among people in Germany, and anti-semitic behavior became more commonplace. This shows how the position of the Jews changed in the sense that they were now excluded from society by law, rather than just informal behaviour, as previously. ...read more.