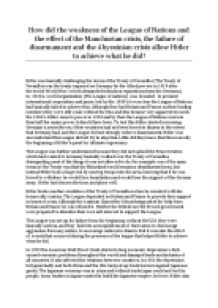 How did the weakness of the League of Nations and the effect of the Manchurian crisis, the failure of disarmament and the Abyssinian crisis allow Hitler to achieve what he did?

﻿How did the weakness of the League of Nations and the effect of the Manchurian crisis, the failure of disarmament and the Abyssinian crisis allow Hitler to achieve what he did? ________________ Hitler was basically challenging the terms of the Treaty of Versailles (The Treaty of Versailles was the treaty imposed on Germany by the Allied powers in 1919 after the end of World War I which demanded ridiculous reparations from the Germans). In 1920 a world organization (The League of nations) was founded to promote international cooperation and peace, but by the 1930?s it was clear the League of Nations had basically failed to achieve this. Although they had Britain and France as their leading members they were still weak without the USA and this became very apparent towards the 1930?s. Hitler came to power in 1933 and by then the League of Nations was less than half the major power it should have been. To test this Hitler started increasing Germany?s armed forces. Other countries had not been forced to disarm to the extent that Germany had, and the League did not strongly enforce disarmament. Hitler was successful and the League did not try to stop him. Little did they know that this was only the beginning of Hitler?s quest for ultimate supremacy. ...read more.

They claimed that the Chinese had sabotaged the railway and in retaliation they overran Manchuria and threw out all Chinese forces. When China appealed to the League, Japan stated that they were not invading as an aggressor but merely settling a local difficulty. Following their example Hitler did the same thing, when he used the agreement between the USSR and France to claim that Germany was under threat and that he should be allowed to place troops on his own frontier. And also when he claimed that the Czechs were mistreating the Germans in the Sudetenland and he intended to rescue them. By using these petty excuses Hitler was able to get what he wanted just like the Japanese had in China. When the Japanese pulled out of the League of Nations it was like a warning to the League that they were not afraid to start a war. Banning arms sales to Japan were discussed but they were worried that Japan would retaliate and the war would escalade. Britain and France did not want to risk their navies or armies in a war with Japan and only the USA and the USSR had the resources from Japan but they were not members of the League. Hitler knew that Britain and France would not retaliate against him because they did not want to risk their armies, this made it easier for him to take the risks he took. ...read more.

Most probably the French and the British were trying to avoid the same events that had happened with Mussolini. In 1936 Hitler marched his troops into the Rhineland, this move was perfectly timed. The League watched on helplessly. And if they wanted the support of the Italians then they needed to give Mussolini what he wanted but they were too late because in November 1936 Hitler and Mussolini signed an agreement of their own called the Rome- Berlin axis. The League was too late because Mussolini had been an important ally against Hitler. Hitler had luck on his side, he probably was not the ?genius? we think he is. He just had the perfect timing and he knew from past events what the risks were and how he should act to get what he wanted. Basically he had learnt from the others mistakes and he had studied the weaknesses of the league well. The Abyssinian crisis, the failure of disarmament, the Manchurian crisis and the failure of the League just made Hitler?s Job even easier. The league was so weak, he could basically just walk all over them and demand what he wanted or threaten them with war, this led to Britain and France following a policy of Appeasement . So it really makes u think, was Hitler just a lucky man who knew how to captivate the people and make everyone believe that he was the answer to their problems? Or was Hitler really the greatest mastermind of his time? ...read more.