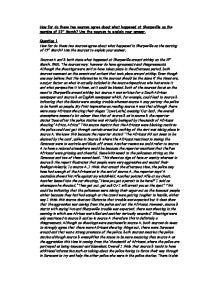 How far do these two sources agree about what happened at Sharpeville on the morning of 21st March? Use the sources to explain your answer.

Both sources mention the police station although source B exemplifies the scene to be more menacing than source A as the aggression this time is coming from the 'thousands' of Africans, where the police are portrayed as being innocent and blameless. Overall I think that source B tends to have additional information such as talking about the police having to force their way through in Saracens to try and help the other police who were in the police station. There is also some information about shootings having taken place in the morning which meant trouble was expected from the beginning of the day, but in source A there is nothing of the sort mentioned apart from the fact that the police were armed. I think that both sources agree with each other to a certain extent and also disagree, but the main difference would be in the atmosphere of Sharpeville as one source portrays it to be more menacing than the other. Question 2 Study sources C and D. Do these photographs prove that either source A or source B is wrong? Use the sources to explain your answer. From looking at sources C and D, I can see similarities in them and with sources A and B. I think that source C tends to have many elements which match source A with the descriptions mentioned such as 'Some kids waved to the policemen sitting on the Saracens and two of them waved back,' Although we cannot see policemen waving, we can clearly see them sitting on the Saracens. ...read more.

From looking at both sources I think this would be most likely to take place in source B where the crowd are more active which could frustrate the policemen. However in both sources the police do not seem to be active. In source C, the reason for this could be because the picture is taken early in the morning but in source D, the location of the photo could undermine this, for example, the source mentions police being quite temperamental outside the police station but the photo may not have been taken there. In source B, a council car is mentioned and we can see a car in the car in the picture we could be the council car. Overall I think that source C confirms some evidence in source A, like the police and Saracens being present however contradicts others but this could be because the photo was taken early in the morning. Source C does not tend to prove much of what was said in source B. Source D matches some details in source A but also undermines others such as the police anger and Source D's overall atmosphere seem alike but the details mentioned do not tend to match especially about the Africans being very violent as they seem to protesting, just not harmfully but rather peacefully. I do not think that the sources could be proven wrong, but some details are undermined or cannot be backed up strong enough to prove, such as source B, which could indicate it to be wrong. ...read more.