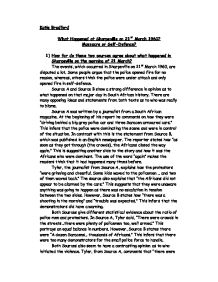 What Happened at Sharpeville on 21st March 1960?Massacre or Self-Defence?

Katie Bradford What Happened at Sharpeville on 21st March 1960? Massacre or Self-Defence? 1) How far do these two sources agree about what happened in Sharpeville on the morning of 21 March? The events, which occurred in Sharpeville on 21st March 1960, are disputed a lot. Some people argue that the police opened fire for no reason, whereas, others think the police were under attack and only opened fire in self-defence. Source A and Source B show a strong difference in opinion as to what happened on that major day in South African history. There are many opposing ideas and statements from both texts as to who was really to blame. Source A was written by a journalist from a South African magazine. At the beginning of his report he comments on how they were "driving behind a big grey police car and three Saracen armoured cars." This infers that the police were dominating the scene and were in control of the situation. In contrast with this is the statement from Source B, which was published in an English newspaper. The reporter states how "as soon as they got through (the crowds), the Africans closed the way again." This is suggesting another side to the story and how it was the Africans who were dominant. The use of the word "again" makes the readers think that it had happened many times before. Tyler, the journalist from Source A, explains how the protestors "were grinning and cheerful. Some kids waved to the policemen ... and two of them waved back." The source also explains that "the Africans did not appear to be alarmed by the cars." This suggests that they were unaware anything was going to happen as there was no escalation in tension between the two sides. However, Source B states how "there was a shooting in the morning" and "trouble was expected." ...read more.

The writer could have also picked up on things such as sounds, smells and tension, which could not have been experienced through film or reports. He uses a more realistic approach in his account, as he describes people's actions, expresses their opinions and uses comparisons. This is shown when it says, "He was swinging it around in a wide arc from his hip, as though he was fanning a movie camera." This enables the readers to relate to the events and therefore, feel more assured by it. The textual source also gives a lot more information as well as adding a lot of extra detail, which aggress with the photo. However, source E has a few features, which make it less useful as evidence. The writer happens to be a journalist, reporting for a South African magazine. This means that he is an expert in persuading people to take particular views. He was also the only journalist in Sharpeville and therefore, knew that no there accounts could be published and argued against his. This would make him more likely to alter the truth in order to gain more support for his side. Source G is also very important as proof of what happened at Sharpeville. It is photographic evidence and so can be used to validate other sources. The details can be compared to eyewitness accounts so that the false statements are discovered. The photographs cannot have been exaggerated or changed, which means that the shots are completely accurate. However, like Source E, there are also features, which makes this photo less useful. For example, it was only taken at one moment in time and cannot represent everything that happened. The photograph could have also been taken from a specific angle to show the scene that the photographer wanted to be published. This means that it could have been a biased shot and therefore, not useful as evidence. ...read more.

The writer of this statement is unknown, however, it is likely to be a white person if they had been allowed to write a book on South Africa. Therefore, it is impossible to determine whether it is a biased point of view or not. In Source B, the reported said, "the police station was virtually besieged by thousands of Africans" and that the police had to "force a way in using the Saracens." This implies that there was strong resistance and that the police were unable to cope with the aggressive protestors. The photographs from both Source's C and D also seem to paint a picture of overpowering protestors in contrast with a weak and helpless police force. In Source E, the police claimed, "they were in desperate danger because the crowd was stoning them...the police have also said that the crowd was armed with ferocious weapons." This implies that they were being very provocative and caused the shootings because of their irresponsible behaviour. The police commander at Sharpeville, speaking in Source H, explained how, "The native mentality does not allow Africans to gather for peaceful demonstrations" and that "Hoards surrounded the police station." He was one among many to share this opinion of the vast number of demonstrators and therefore, strengthened the case. The last source from the collection was written by Dr Verwoerd, the Prime Minister of South Africa in 1960. He commented on how the "Africans demonstrated in an unsuitable manner "by entering people's homes and forcibly removing the identity books." Again, this established a view of the protestors as being violent and uncooperative, a stereotype, which they had had for many years previous to this. After the acknowledgement of all Sources, it is extremely difficult to come to a definite response as to which interpretation is truthful. There is not enough evidence to prove that one statement is more reliable than the other and therefore, it is impossible to make an accurate decision. ...read more.