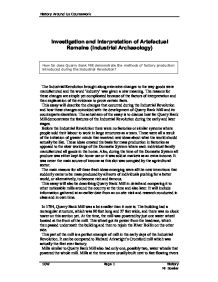 How far does Quarry Bank Mill demonstrate the methods of factory production introduced during the Industrial Revolution?

Investigation and Interpretation of Artefactual Remains (Industrial Archaeology) The Industrial Revolution brought along extensive changes to the way goods were manufactured and the word 'industry' was given a new meaning. The reasons for these changes are simple yet complicated because of the factors of interpretation and then explanation of the evidence to prove certain facts. This essay will describe the changes that occurred during the Industrial Revolution and how these changes coincided with the development of Quarry Bank Mill and its counterparts elsewhere. The actual aim of the essay is to discuss how far Quarry Bank Mill demonstrates the features of the Industrial Revolution during the early and later stages. Before the Industrial Revolution there were no factories or similar systems where people sold their labour to work in large structures as a team. These were all a result of the initiation of greater minds that received new ideas about what the world should actually be like. These ideas created the basis for mass production in factories as opposed to the slow workings of the Domestic System where each individual family manufactured all goods in the home. Also, during the time of the Domestic System all produce was either kept for home use or it was sold at markets as an extra income. ...read more.

This is the reason to why Quarry Bank Mill is only an excellent example of an early rural mill and a significantly worse example of a later urban mill as they were not of the same form and usually only made use of steam power. Later developments to Quarry Bank Mill include changing and adding certain features such as steam engines and machinery and also adding a larger 100 horsepower water wheel. The wheel, which was built between 1818 and 1820, is the one that still powers the mill at demonstrations today. These developments at Quarry Bank Mill are very similar to what would have happened to most other early, rural mills around the United Kingdom which adds to the fact that Quarry Bank Mill is a very good, if not the best, surviving example of one of these early, rural mills. When Samuel Greg decided that he was going to build Quarry Bank Mill in the countryside he was taking a risk that others would not have dared to approach. The problem with the location of Quarry Bank Mill was that the nearest settlement was Wilmslow, which was quite far away in those days. That meant that Samuel Greg would have to attract people to the mill and he would also have to develop a prospering community that the skilled workers who lived in the towns and cities would find interesting. ...read more.

Quarry Bank Mill is, to say the least, an important source of information when trying to establish an understanding of our industrial past and showing what the ways and methods that were used by the people at the time were actually like. The mill and the Greg family might mot be the best examples of what most other mills were like at the time but they are certainly great examples of how mills should have been and how people should be treated. The Greg family and Quarry Bank Mill are objects on display that show how much progress has been made not just in the industrial sector but also in the area of human rights over the last three hundred years. It is people like the Greg family that began to realise that their workers should be treated better and that one cannot work under such circumstances that were evident in other mills. To conclude, Quarry Bank Mill is a very helpful source in trying to unveil the methods of factory production in modern times but, to be fair, is actually more a question of what it should have been like than what it was like in the industrial sector at the time of the Industrial Revolution. History Around Us Coursework Andreas Friberg 10W Page 1 History Mr Bowler ...read more.