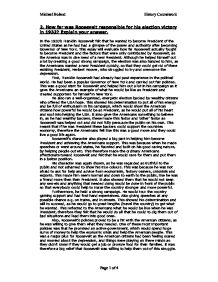 2. How far was Roosevelt responsible for his election victory in 1932? Explain your answer. In the 1920's Franklin Roosevelt felt that he wanted to become President of the United States as he had had a glimpse of the power and authority after becoming Governor of New York. This essay will evaluate how far Roosevelt actually fought to become President and the factors that were only contributed by Roosevelt, as the America was in dire need of a new President. Although he helped himself out a lot by creating a good strong campaign, the election was also handed to him, as the Americans wanted a new President quickly, so that they could get rid of there existing President, Herbert Hoover, who struggled to try and overcome the depression. First, Franklin Roosevelt had already had past experience in the political world. He had been a popular Governor of New York and carried out fair policies. This was a good start for Roosevelt and helped him out a lot in his campaign as it gave the Americans an example of what he would be like as President and created supporters for himself in New York. He also ran a well-organised, energetic election backed by wealthy citizens who offered the USA hope. ...read more.

This is because Roosevelt was Democrat, which meant that he was all for the people and his own country. Whereas the Republicans only cared about money and businesses, believing that the businesses would start themselves up again through the depression, and therefore the Republicans did not help the depression. This allowed the public to understand that they were looking for something different and found their trust in Roosevelt as he was all for the people, which was what was needed at that time in hand. Finally, Roosevelt caught Polio while holidaying in August 1921. Although this was a setback for Roosevelt, it proved great in his campaign. This is because is showed the American public his determination to succeed as he fought as hard as he could by trying to stand up at public occasions and helping out many other people with the illness. Therefore they hoped that this would reflect in his Politics and out of sympathy and analysing his will to do well and be strong, they would vote for him to become President. Alternatively, Roosevelt did not do all of the work to make himself become President, there was also other factors that contributed to his victory. These factors helped him out a lot, but proved that he was not as capable to do it himself, but instead gave him a push, which contributed to Roosevelt leading to success. ...read more.

Overall, I feel that it was shown to the American public that Roosevelt was very responsible for helping himself to become President, as he knew what he wanted and he pushed himself and aimed high, until he reached his goal. His goal was creating a good campaign, which allowed him to interact with normal citizens and come across as one of them, therefore this would enable him to gain their trust and earn him the much-needed votes. Roosevelt was also pushed into the Presidency by other factors. I feel that the most important of these reasons is the failing of Herbert Hoover, which allowed Roosevelt's determination and will to succeed to shine through. This was because many Americans citizens had had enough with Hoover as he was not coping and helping the depression, therefore wanting to get rid of him. This resulted with the public choosing anybody else to become President, rather then seeing Hoover be re-elected. But on the other hand, Franklin Roosevelt also helped himself out a lot. Although he had disabilities he fought through them and showed his passion and commitment to become President. Roosevelt's popularity was proved when the election took place as he won by an astounding twenty-two million, eight hundred thousand votes to Hoovers abysmal fifteen million, eight hundred thousand votes. Michael Boland History Coursework Page 1 of 4 ...read more.