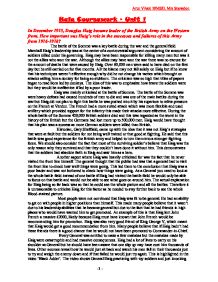 How important was Haig's role in the successes and failures of the British Army from 1916-1918?

Haig Coursework - Unit 1 In December 1915, Douglas Haig became leader of the British Army on the Western front. How important was Haig's role in the successes and failures of this Army from 1916-1918? The battle of the Somme was a key battle during the war and the general field Marshall Haig's leadership was at the center of a controversial argument considering the amount of soldiers killed under his governing. Haig may have been responsible for killing many men but was it not the allies who won the war. Although the allies may have won the war there was no excuse for the amount of deaths that were caused by Haig. Over 60,000 men were said to have died on the first day but he still carried on for five months. All the blame may not fall solely on Haig but if he knew that his techniques weren't effective enough why did he not change his tactics which brought on attacks calling him a donkey for being so stubborn. The criticism was so high that titles of papers began to read lions led by donkeys. The idea of this was to emphasize how brave the soldiers were but they would be ineffective if led by a poor leader. Haig was mainly criticized at the battle of Somme. ...read more.

Haig had a lot of lives to carry on his shoulder as General but he should have been aware that one slip up may have cost him thousands of lives. Other sources reveal how he would just sit back and watch his men fall in their thousands just to try and weigh the enemy down and if that failed he would just try again. This is highlighted in the video 'Black Adder'. The video shows General Haig practicing with toy soldiers and just knocking them down and then sweeping them up. This shows how little sympathy he had for his men as nearly every family in the war had lost someone. If Haig was in charge of the British Army he had to rely on the information given to him by others but the information given to him by his head of intelligence John Charters worried about pleasing Haig and therefore resulted in him lying and telling him the battle was going well. Haig was dealing with a battle where he was given the wrong information about which might have caused him to change his tactics if he had known the correct circumstances. A major effect of this proved to be very vital as Haig was told that at the Battle of Somme the Germans were on the Brink Of collapse so one final push would topple the Germans. ...read more.

Over 300,000 British soldiers were killed in this battle and it took 3 months to take Passchendaele. What Haig had originally planned as a breakthrough was a complete disaster with the British only advancing five miles. The fact that the Germans suffered heavy causalities was the only real consolation in this battle. In conclusion to this it is impossible to determine whether the failures of the war should fall on Haig and it is unfair to say that Haig was solely to blame for the massive losses during the war. Haig though did make massive mistakes during the war but some of the losses were due to others misleading him which lead to heavy consequences and that blame should not fall on him. The argument against Haig was the fact of how little he cared about the death rate but as a leader you must put these things behind you and look forward. Even if Haig had been replaced how would you know that this new leader would have done a better job and was it not Haig's final tactic which won it for the British. So my final verdict is that Haig genially tried his best and in the end the British did win the war and Haig should take credit from that. As he had come under pressure because of his failures but should he not gain praise for his successes. ?? ?? ?? ?? Arun Vivek 10MSD, Mrs Snowdon -1 - ...read more.