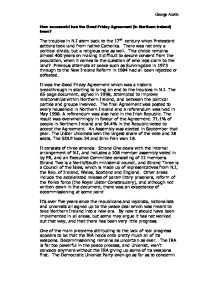 How successful has the Good Friday Agreement (in Northern Ireland) been?

How successful has the Good Friday Agreement (in Northern Ireland) been? The troubles in N.I stem back to the 17th century when Protestant settlers took land from native Catholics. There was not only a political divide, but a religious one as well. This divide remains almost 400 years on making it difficult to secure consent from the population, when it comes to the question of who lays claim to the land? Previous attempts at peace such as Sunningdale in 1973 through to the New Ireland Reform in 1984 had all been rejected or defeated. It was the Good Friday Agreement which was a historic breakthrough in starting to bring an end to the troubles in N.I. The 65-page document, signed in 1998, attempted to improve relationships within Northern Ireland, and between the political parties and groups involved. The final Agreement was posted to every household in Northern Ireland and a referendum was held in May 1998. ...read more.

The Democratic Unionist Party even go as far as to condemn The UUP for entering into talks with terrorists, and as the GFA didn't directly deal with decommissioning, no real action has been made towards it. Whenever the IRA does make any statements regarding the matter the UUP can be very dismissive. There are still groups in N.I which are still committed to terrorism, so how can the GFA have been a success? Prior to the Northern Ireland assembly collapsing, (arguably the biggest failure in the process so far) anti-agreement unionists, led by Ian Paisley leader of the Democratic Unionist Party described the 2001 elections to the assembly as a "second referendum." What he was referring to was the choice Unionist voters had to make between the pro agreement UUP party and his own anti agreement party, the DUP. Rather worryingly, for those who support the peace process, he made a huge gain on them, and this was also reflected by nationalists where Sinn Fein took votes from the SDLP. ...read more.

There is a real willingness for it to work, and although it may only be a change in attitude since September 11th, people strongly reject terrorism and violence now. There is also no real alternative. The people don't want to return to how things were prior to the GFA. People have lost family and friends, and they voted it for it, so they'll support it, as will the Government of the UK and Ireland. The Irish government released a declaration of support, the first point of it being: "We, the participants in the multi-party negotiations, believe that the agreement we have negotiated offers a truly historic opportunity for a new beginning." I believe that there will be an end to the problems eventually. The first big steps have been made towards peace, and if gradual decommissioning continues, then slowly British troops will leave. There will probably always be a problem as to the legitimacy of the state, but I am optimistic that over time violence will become part of N.I's history, and through education and talking they'll be able to find a resolve. George Austin ...read more.