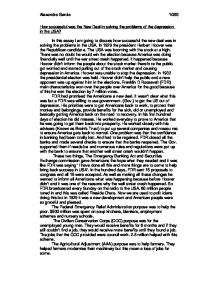 How successful was the New Deal insolving the problems of the depression in the USA?

How successful was the New Deal in solving the problems of the depression in the USA? In this essay I am going to discuss how successful the new deal was in solving the problems in the USA. In 1929 the president Herbert Hoover was the Republican candidate. The USA was booming with the stock at a high. There was no doubt he would win the election because America was doing financially well until the war street crash happened. It happened because Hoover didn't inform the people about the stock market therefore the public got worried and started pulling out of the stock market and causing depression in America. Hoover was unable to stop the depression. In 1932 the presidential election was held. Hoover didn't help the public and a new opponent was up against him in the elections. Franklin D Roosevelt (FDR) main characteristics won over the people over America for the good because of this he won the election by 7 million votes. FDR had promised the Americans a new deal. It wasn't clear what this was but a FDR was willing to use government. (Gov.) to get the US out of depression. ...read more.

Regardless of FDR's measures black Americans and poor farmers were still struggling. One person in particular who was against FDR was Huey Long. He gained power, sometimes illegally by intimidation and bribery. Although he supported FDR's views at first he thought the second deal was making things to complex and not enough to help Americans. He decided to put forward his own scheme called Share our Wealth. All personal fortuned where reduced to $3 million maximum and maximum income would be $1 million a year. Gov taxes where to be shared, pensioners to everyone over 60 including free washing machines and radios. FDR thought he was one of the two men most dangerous in USA until he was assassinated in 1935. Another man who criticized FDR's views was Dr. Francis Townsend of the Townsend Club. His deals where for pension to be $200 per month for people over 60 baring in mind that it was spent within the month. A catholic priest attacked FDR on national radio. On the other hand the New Deal was doing too much. Some reasons were that it was too complicated and too many rules and regulations where in order and everyone was getting confused. ...read more.

I believe that in some aspects the New deal was a success because it regained trust (which Hoover provided none of), helped workers who were unemployed and provided benefits, Helped Black Americans receive equal rights as whites, Women treated equally as men and basically got Americans out of depression gradually from 1932 till 1937. Although I do believe that there were many failures of the New Deal because many oppositions argued against him faulting everything and anything, violence was caused because of disagreements, 6 million unemployed because of the war, racist and sexism still occurred and the matter of FDR cutting the New Deal budget. I think that although there were many successes and failures in the New deal plans, FDR certainly helped the USA for 5 years after Hoover did nothing to ensure Americas trust. I also think that the big problem that brought FDR to failure was the cut in the New deals budget. People's faiths were broken and it was such a big downfall especially with the war just around the corner. So to answer the question 'How successful was the New Deal in solving the problems of the depression in the USA?', I would say it was successful up to the point where FDR cut the New Deal Budget and when war broke out soon after. ?? ?? ?? ?? Alexandra Garcia 10SS ...read more.