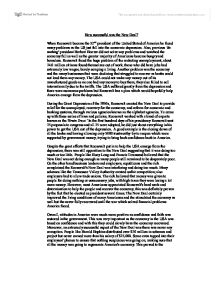 How successful was the New Deal - FDR

How successful was the New Deal? When Roosevelt became the 32nd president of the United Stated of America he faced many problems as the US just fell into the economic depression. Also, previous 'do nothing' president Herbert Hoover did not solve any problems and watched the economy fall as well as the greater majority of Americans become hungry and homeless. Roosevelt faced the huge problem of the rocketing unemployment; about 14.0 million citizens found themselves out of work, those who did have jobs had extremely low wages, barely scraping a living. Another problem was the economy and the many businesses that were declining that struggled to recover as banks could not lend them any money. The USA could not make any money out of its manufactured goods as no one had any money to buy them; they also failed to sell internationally due to the tariffs. The USA suffered greatly from the depression and there were numerous problems but Roosevelt has a plan which would hopefully help America emerge from the depression. During the Great Depression of the 1930s, Roosevelt created the New Deal to provide relief for the unemployed, recovery for the economy, and reform for economic and banking systems, through various agencies known as the alphabet agencies. To come up with these series of laws and policies, Roosevelt worked with a band of experts known as the 'Brain Trust.' ...read more.

Although unions were not a complete success either as they were always treated by suspicion by the employers and they were always picture perfect, there were many problems. Many strikes and disagreement within unions were broken up with brutal violence. Furthermore, there were companies such as Ford and Chrysler which hired their own thugs to deal and control the local police force. There was much opposition from business leader and Republicans as they still believed that the best way for businesses to improve and make more money was for the government to leave them alone and not get interfered. They hated the thought of labour unions as they had to spend profits on making the workers happier, something that was taken into a much smaller account before the Great Depression. Despite the opposition from business leaders as well as the violence caused by trade unions and companies, the New Deal improved the live of many industrial workers and also big business remained immensely powerful. Roosevelt's New Deal made many accomplishments throughout the 1930s when unemployment and the economy was involved but it was not enough, they had to improve and try to develop it even further. The New Deal solved problems like the increasing unemployment which was reduced by an approximate of 8 million but there was still a remaining 6 million unemployed, a huge number. ...read more.

However, they still remained to be an excluded part of society, which was not such a great problem as they were a very small number in comparison to the rest of the population. This implies that the New Deal attempted to try to improve the living and working conditions of just about everyone it could. This clearly proves that Roosevelt was extremely determined to makes America a better place to live. To conclude, the New Deal was a success in numerous ways as it provided jobs as over 8 million people were given jobs. Also, many US citizens gained confidence and had faith in the government which was very important for the recovery of the USA. The New Deal tackled many problems and came out with many good solutions, however, the recovery and reform of the USA was taken on a lager scale making more improvements, it is more likely that America would have emerged from the Great Depression at a faster rate. The USA might not have been so dependant on government funding. Roosevelt needed to develop the New Deal and improve the state of the USA at the time even further; this way there would not have been so many letdowns for the New Deal. The war might not have been the USA's only ticket out of the depression. It is certain that Americans appreciated Roosevelt and saw that he was doing a great job as he voted president several times. ...read more.