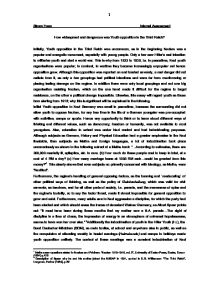 How widespread and dangerous was Youth opposition in the Third Reich?

Simon Haug Internal Assessment How widespread and dangerous was Youth opposition in the Third Reich? Initially, Youth opposition in the Third Reich was uncommon, as in the beginning Nazism was a popular and energetic movement, especially with young people. Only a few saw Hitler's real intention to militarise youth and start a world war. This is why from 1933 to 1939, i.e. in peacetime, Nazi youth organisations were popular; in contrast, in wartime they became increasingly unpopular and hence opposition grew. Although this opposition was reported on and treated severely, a real danger did not radiate from it, as only a few groupings had political intentions and were far from overthrowing or placing lasting damage on the regime. In addition there were only local groupings and not one big organisation resisting Nazism, which on the one hand made it difficult for the regime to target resistance, on the other a political change impossible. Likewise, this essay will regard youth as those born starting from 1915; why this is significant will be explained in the following. Initial Youth opposition in Nazi Germany was small in peacetime, because the surrounding did not allow youth to oppose Nazism, for any free time in the life of a German youngster was pre-occupied with activities, camps or sports. Hence any opportunity to think or to learn about different ways of thinking and different values, such as democracy, freedom or humanity, was not available to most youngsters. Also, education in school was under Nazi control and had indoctrinating purposes. Although subjects as German, History and Physical Education had a greater emphasise in the Nazi timetable, than subjects as Maths and foreign languages, a lot of indoctrination took place unconsciously as shown in the following extract of a Maths book: "...According to estimates, there are 300,000 mentally ill, epileptics, etc. in care. (b) How much do these people cost to keep in total, at a cost of 4 RM a day? ...read more.

Detlev Peukert sees the ultimate resistance towards Nazism20, as the regime tried to abolish any kind of class and clear patterns can be seen, that the `Swing Youth` only consisted of members of one class and hence, probably without purpose, undermined Nazism. The other type of youth resistance organisation, the "cliques with an asocial-criminal character"21 was the "Edelwei�piraten" or "Meuten", which had mainly proletarian origins and other than the `Swing Youth` were politically active. They targeted HJ leaders ambushing and robbing them; therefore "Edelwei�piraten" were in addition to their sense of freedom and independence clearly oppositional to the regime and therefore politically dangerous. They usually consisted of 14 to 18 year olds, as with 14 one had reached the minimum school-leaving age, was therefore able to earn his own money and to escape from the HJ. With the war progressing almost any 18-year olds were recruited to the front. The "Edelwei�piraten" were described in a report from the Hitler Youth in 1942 as having "once again formed gangs consisting of significant numbers which organise outings, publicly provoke the Hitler Youth and undermine the work of its leaders...Leaders of the Hitler Youth have been ambushed, pestered and even shot at."22 However, despite these warnings, the physical aggression of the "Edelwei�piraten" was small. They rather concentrated on slogans as "Down with Hitler", "Metals for Murder" and "Down with Nazi Brutality"23, as well as hiking trips away from the HJ and singing anti-Nazi songs24. Similar groups, as the "Fahrtenstenze" (Travelling Dudes) from Essen, "Kittelsbacher Piraten" from Oberhausen and D�sseldorf and the "Navajos" from Cologne, existed throughout the whole Reich, but were not included in one whole organisation and rather were local groupings of people with same goals. In addition, the former "b�ndische Jugend" differed from region: Whereas the Prussian "Meuten" were more orientated on Communism, the Bavarian ones had almost only leisure purposes25. In 1942, the Communist Party distributed "stickers and leaflets to pass on"26 to the Edelwei�piraten. ...read more.