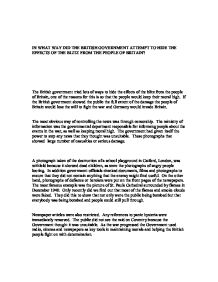 IN WHAT WAY DID THE BRITISH GOVERNMENT ATTEMPT TO HIDE THE EFFECTS OF THE BLITZ FROM THE PEOPLE OF BRITAIN? The British government tried lots of ways to hide the effects of the blitz from the people of Britain, one of the reasons for this is so that the people would keep their moral high. If the British government showed the public the full extent of the damage the people of Britain would lose the will to fight the war and Germany would invade Britain. The most obvious way of controlling the news was through censorship. The ministry of information was the governmental department responsible for informing people about the events in the war, as well as keeping moral high. The government had given itself the power to stop any news that they thought was unsuitable. These photographs that showed large number of casualties or serious damage. A photograph taken of the destruction of a school playground in Catford, London, was withleld because it showed dead children, as were the photographs of angry people looting. In addition government officials checked documents, films and photographs to ensure that they did not contain anything that the enemy might find useful. On the other hand, photographs of defiance or heroism were put on the front pages of the newspapers. ...read more.

would be in these buildings at one time, if a bomb was to hit any of these buildings, a high percentage of people would die. Even in peoples homes things started to deteriorate because you were only allowed a certain amount of water for your bath. You were not allowed to use all of your gas due to a shortage. When you went home, you had to turn all your lights out in your house, because if the German bombers saw lights they would know that this was a densely populated town or city-and then they would know that if they bombed that particular area they could cause a lot of damage-so therefore everybody kept their lights out at night for fear of being bombed. During the morning you had to try and find something to eat, and maybe find some new clothes-but all the shops had either been closed down or blown up. Consequently, this means that you had to wait for the rations to come to your area, and because most of the roads had been damaged by the bombs beyond repair, the rations took a long time to arrive. The transportation systems were also destroyed, so if you were trying to get your children out to the countryside, you would he to wait for them to re-build the track.. ...read more.

Another reason for the bombing was to cause destruction and panic. As the bombs destroyed two million homes, people were forced to live in make-shift air raid shelters or in the underground stations. The bombs also destroyed the roads, and therefore rations were dispersed even slower, with the roads destroyed it also took a lot longer to travel to and from work, people having divert around the roads that had been destroyed. The German bombers also targeted the war production factories and food factories, as a result of this over five hundred and seventy thousand people died while working in these factories. Hitler's main aim was to destroy the British moral, so that the British would not have the will to fight on anymore and then the Germans could invade Britain, this had a reverse effect , because when they bombed the British people the class barriers were destroyed making the British people stronger. The Germans also bombed the major cities because the main infrastructure of the Country was in the major cities and if the bombs destroyed this infrastructure Britain would be forced into submission. The bombing also disturbed peoples sleeping patterns, making it impossible for them to sleep during the nighttime, thus people either gave up hope or slept during the day, which meant that the factories had no workers, which meant that there was a shortage of rations and ammunition for the British public. ...read more.