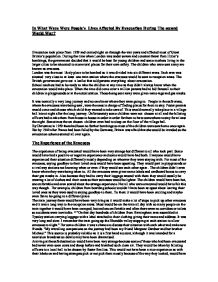 In what ways were people's lives affected by evacuation during the second world war?

In What Ways Were People's Lives Affected By Evacuation During The second World War? Evacuation took place from 1939 and carried right on through the war years and affected most of Great Britain's population. During the time when London was under severe and constant threat from Hitler's bombings, the government decided that it would be best for young children and some mothers living in the larger cities to be relocated to more rural places for their own safety. The children who were sent away are known as evacuees. London was the most likely place to be bombed so it was divided into six different areas. Each area was situated very close to at least one train station where the evacuees would be sent to reception areas. The British government gave out a leaflet that told parents everything about evacuation. School teachers had to be ready to take the children at any time as they didn't always know when the evacuation would take place. When the time did come over a million parents had to bid farewell to their children in playgrounds or at the actual station. Those being sent away were given name tags and gas masks. It was normally a very long journey and no one knew where they were going to. People in the safe areas, where the evacuees were being sent , were the ones in charge of finding places for them to stay. Foster parents would come and choose which child they wanted to take care of. This would normally take place in a village hall late at night after the long journey. Unfortunately some children were not chosen at all and the billeting officers had to take them from house to house in order in order for them to have somewhere to stay for at least the night. ...read more.

The evacuees also deal with the different beliefs of their foster families. For instance, in some cases the host families wouldn't even allow children from Jewish families to live in their homes. "We were also very cold and as they believed in low powered bulbs we lived in a sort of twilight", I don't like the man's face. I don't like the lady's face much, Perhaps it will look better in daylight." This is a primary source and shows how scared and confused a young child could feel in that situation. Some evacuees did have pleasant experiences and enjoyed living with their foster family. They were given the chance to experience things they never had before like having fresh air, seeing farm animals, large fields to run and play in and fresh food. "I seem to remember having my favourite tinned fruit (a luxury at that time) for tea.", "Everything was so clean in the room. We were given flannels and toothbrushes. We'd never cleaned our teeth up till then. And hot water came from the tap. And carpets and something called an eiderdown. This was all very odd. And rather scaring". This shows that the difference between city life and country life could be quite shocking and frightening for an evacuee child. Some foster families got on so well with the children they took care of that some even tried to adopt them, "After we went home Mr Reece came to London and asked my mother if he could adopt us." Even if the children liked living with their foster parents they would have been homesick. Most evacuees would live years with their foster parents before they saw their real ones again. ...read more.

They had to share their homes with strangers from large cities who would have been very different to them and they may not have wanted to let them stay. The country families would have been able to see how different city people were from them. Some were shocked at how different they were not only by the way they looked but their manners and knowledge of hygiene. The host families had no choice but to take the evacuees in so they may have felt bitter towards them from the start . The foster families may have got on well with the evacuees and mothers and have a positive experience. The evacuees would have had a positive or negative experiences or both. They would have felt scared about leaving their parents to go to live with strangers in a place they had never been. Sometimes they couldn't even understand their foster parents. If they were nervous they would wet their beds and some foster parents would beat and abuse them. But they may have had good experiences by staying with nice people who treated them well. They also would have been able to eat fresh food and more of it and clean and healthy lifestyles. One thing most of the evacuees would have had in common would be that they would have felt afraid, lonely and confused about their change of life because of the many differences and being away from their families. It is hard to make a clear definition to whether or not evacuation had a positive impact or not because everyone involved would have had different experiences and there are so many different sources given as evidence. But evacuation did help to make Britain better for the future of Britain after people realised how bad life for some living in the large cities was. ...read more.