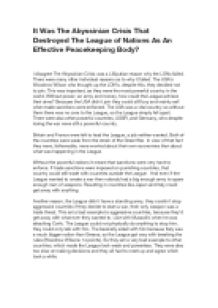 It Was The Abyssinian Crisis That Destroyed The League of Nations As An Effective Peacekeeping Body. Discuss

﻿It Was The Abyssinian Crisis That Destroyed The League of Nations As An Effective Peacekeeping Body? I disagree The Abyssinian Crisis was a Lilliputian reason why the LONs failed. There were many other individual reasons as to why it failed. The USA?s Woodrow Wilson who thought up the LON?s, despite this, they decided not to join. This was important, as they were the most powerful country in the world. Without power, an army and money, how could the League achieve their aims? ...read more.

Britain and France were left to lead the League, a job neither wanted. Both of the countries were weak from the strain of the Great War. In view of that fact they were, fathomable, more worried about their own economies than about what was happening in the League. Without the powerful nations it meant that sanctions were very hard to enforce. If trade sanctions were imposed on punishing countries, that country could still trade with countries outside the League. ...read more.

This set a bad example to aggressive countries, because they?d get away with what ever they wanted to. Like with Mussolini when he was attacking Corfu. The League could not physically do anything to stop him; they could only talk with him. The basically sided with him because Italy was a much bigger nation than Greece, so the League got way with breaking the rules (Woodrow Wilsons 14 points). So they set a very bad example to other countries, which made the League look weak and powerless. They were also too slow at making decisions and they all had to meet up and agree which took a while. ...read more.