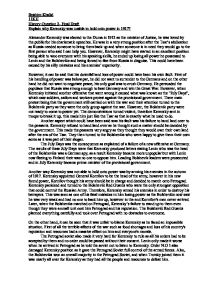 Kerensky. Kerensky might have started in an excellent position being able to woo everyone with his speaking skills, he ended up losing all power he possessed to Lenin and the Bolsheviks and being forced to flee from Russia in disguise.

Alexander Kerensky was elected to the Duma in 1912 as the minister of Justice, he was loved by the public for his charismatic speeches. He was in a very strong position after the Tsar's abdication as Russia needed someone to bring them back up and when someone is in need they would go to the first person who said I can help you. However, Kerensky might have started in an excellent position being able to woo everyone with his speaking skills, he ended up losing all power he possessed to Lenin and the Bolsheviks and being forced to flee from Russia in disguise. This could have been caused by his silly mistakes and his enemies' superiority. However, it can be said that his downfall and loss of power could have been his own fault. First of his handling of power was below par, he did not want to surrender to the Germans and on the other hand he did not want to negotiate peace, his only goal was to crush Germany. He persuaded the populace that Russia was strong enough to beat Germany and win the Great War. ...read more.

Kerensky panicked and turned to the Bolshevik Red Guards who were the only strongest opposition that could control the Russian Army. Therefore, Kerensky armed his enemies in order to destroy his betrayers. This was seen as one of his fatal mistakes in him losing power as the Bolsheviks now saw he was very weak and had no one to back him up, however in the end Kornilov's men never arrived. Later, when the Bolsheviks marched on Petrograd, Kerensky's failure to stand up to them even though they were a small unit cost him Petrograd and his reputation. The Bolshevik Red Guards planned everything carefully and took over Petrograd with no obstacles to overcome. On the other hand, it can be seen that it was unfair to blame Kerensky as he faced an impossible situation. First of all the terrible affects of the war such as food shortages and loss of his country's reputation and resources had a massive effect on him and everyone's morale. The Petrograd soviet also made it very hard for Kerensky to rule as all his orders had to be accepted by them and no order could be passed without their consent. ...read more.

The Bolsheviks exploited a lot of Kerensky's mistakes such as handing land over to the peasants and not making peace with Germany, therefore more people who had lost hope with the provisional government went to the Bolsheviks in seeking a better life as Kerensky never looked to the needs of the populace. The Bolsheviks' slogan "Bread, Peace, Land" really showed the public that they could offer a lot more than the government could ever think of. Also, Trotsky was very important to their success as he became head of the Petrograd Soviet and the Bolsheviks, he was able to help Lenin in defeating Kerensky and taking power. Even though the Bolsheviks had a small force, they were able to take control of Petrograd as no one stopped them or came in their way, this was a result of Kerensky being betrayed by his army and being stranded on his own. Meanwhile the Bolshevik's were planning their execution on Petrograd and it was only a matter of time by which Kerensky would be forced to flee and would be known as the man who tried to make a difference but never took real responsibility of his power. ?? ?? ?? ?? Ibrahim Khalid 11KH History Question 2- Final Draft Explain why Kerensky was unable to hold onto power in 1917? ...read more.